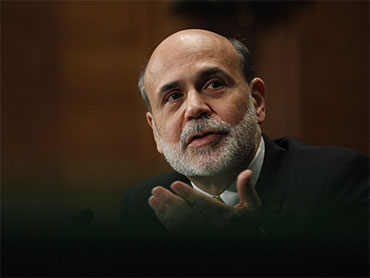 The nation faces a long road to get back to good economic health, Federal Reserve Chairman Ben Bernanke said Monday.

Bernanke said progress is being made after the deepest recession since the 1930s. The worst of the financial crisis is behind the nation and the economy is growing again, he pointed out.

"But we have a considerable way to go to achieve a full recovery in our economy, and many Americans are still grappling with unemployment, foreclosure and lost savings," the Fed chief said in a speech to an annual meeting of Southern lawmakers in Charleston, S.C.

It marks Bernanke's first public comments since the government report released Friday showed the recovery lost a lot of momentum in the spring. The economy grew at a pace of just 2.4 percent in the April-to-June quarter, down from 3.7 percent growth at the start of the year. It was the slowest showing in nearly a year and is too weak to drive down near double-digit unemployment.

Bernanke cited those spending reductions as one of factors behind the "sluggishness of the national recovery."

Economists in an AP Economy Survey, released last week, identified budget woes at state and local governments as a "significant" or "severe" threat to the economic recovery.

State and local governments cut their spending in the first three months of this year at a 3.8 percent pace. That was the biggest cutback since the second quarter of 1981, just before the economy entered a severe recession. They did boost their spending in the second quarter. Skeptical economists, however, think the figure will be revised down, and they predict state and local governments will resume their cutting through the rest of this year.

Fielding questions after his speech, Bernanke said one of the lessons learned from the Great Depression is that Washington policymakers shouldn't pull in economic supports too quickly.

For Congress, that means not moving to slash the deficit or boost taxes right now. And, for the Fed, it means keeping interest rates low.

"We have to be careful about tightening too quickly in the near term — we can maintain some continued support for the economy in the very near term," Bernanke said.

Economists said the Fed is all but certain to hold rates at record lows when it meets on Aug. 10 and repeat a pledge to keep them there for an "extended period."

Bernanke didn't use his speech to talk about any new steps the Fed might take to stimulate the economy.

Delivering the Fed's economic report to Congress last month, Bernanke said the Fed stood ready to take new action to bolster the recovery if the economy flashed signs of backsliding.

The Fed could revive programs to buy mortgage securities or government debt. It could cut to zero the interest rate paid to banks on money left at the Fed or lower the rate banks pay for emergency Fed loans.