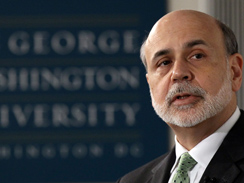 Bernanke says consumer demand remains weak relative to its level before the Great Recession. He notes that other contributors to economic growth — including borrowing and trade — have declined.

His comments provide further insight into the reasoning behind the Fed's plan to hold short-term interest rates near zero through 2014. The central bank has stuck with that timetable despite three months of strong job growth and other signs of economic improvement.

Bernanke made the remarks during the second of four lectures he is giving to George Washington University students this month.