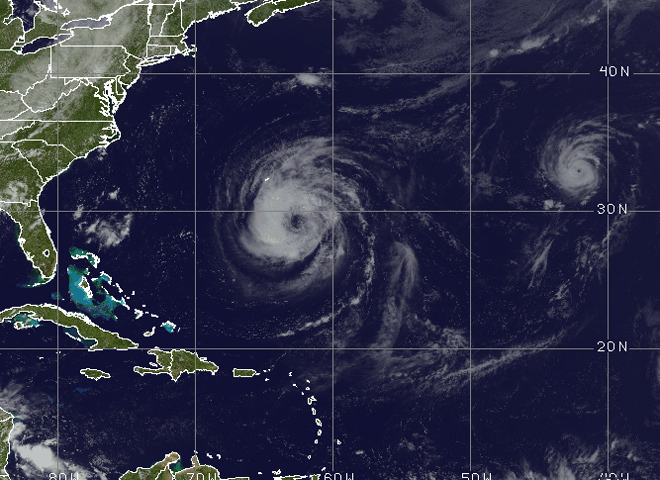 (AP) HAMILTON, Bermuda - Tropical Storm Leslie moved slowly northward Saturday after pausing to spin in place over the Atlantic, and forecasters expected it would regain strength and become a hurricane before passing to the east of Bermuda.

The latest forecasts pointed to the storm going by about 200 miles (320 kilometers) east-southeast of the British territory Sunday afternoon or evening as a Category 1 hurricane, the Bermuda Weather Service said.

"It appears that Bermuda will be spared a direct impact," Wayne Perinchief, the national security minister, said Friday. "However, I urge the public to remain cautious as there is the potential for the storm to re-intensify and change track, and we could experience heavy rain and winds in shower bands."

Some businesses closed early Friday and shops were crowded for a second day with people buying emergency supplies. At least one cruise ship canceled a stop in Bermuda and the airport was expected to close.

Bermuda, a wealthy offshore financial haven and tourist destination, has strong building codes and is accustomed to storms, and many people on the island followed Leslie without fear.

"I have taken precautions," said Gareth Kerr, 29. "The windows have the shutters across and I got supplies such as water and tinned food. If the weather is bad tomorrow I'll just sit indoors."

Still, there was the chance of some flooding, said James Dodgson, a meteorological forecaster, for the Bermuda Weather Service. Dodgson said the storm surge is likely to be relatively small at one or two feet but the surge, coupled with high tide on Sunday could cause some minor flooding in low-lying areas.

The U.S. National Hurricane Center in Miami said Leslie had resumed forward movement after staying stationary Thursday night and into Friday. By Saturday afternoon, the storm had top sustained winds of 65 mph, below the hurricane threshold of 74 mph.

Leslie was about 265 miles south-southeast of Bermuda and was moving north at 8 mph. The U.S. center said it would likely strengthen Saturday and Sunday and was expected to begin gradually increasing its forward speed.

"We expect the weather to go downhill later today with strong gusty winds," said Eric Blake, a hurricane specialist at the U.S. center.

Winds are then expected to slowly ease Sunday night and into Monday, Dodgson said. The total amount of rainfall could reach two inches or more, he added.

Out in the middle of the Atlantic and considered no threat to land, Hurricane Michael was a category 2 storm with maximum sustained winds of 105 mph. On Thursday, it was briefly the first Category 3 of the Atlantic hurricane season.

Michael was moving north-northwest at 5 mph. It was about 930 miles west-southwest of the Azores.