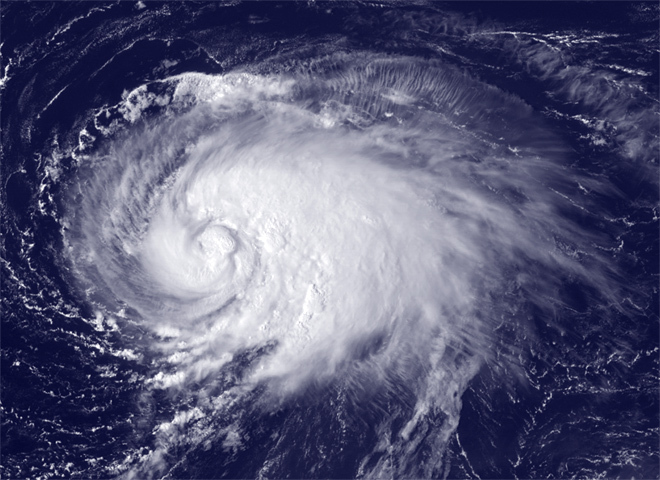 (AP) HAMILTON, Bermuda - Leslie weakened from a Category 1 hurricane to a tropical storm as it stalled over the open Atlantic on Friday, but forecasters said it could become a hurricane again before heading for a swing past the wealthy British territory of Bermuda.

The U.S. National Hurricane Center in Miami said in an update that Leslie's top sustained winds had dropped to near 65 mph, below the hurricane threshold of 74 mph.

The Bermuda Weather Service said the storm was on track to pass about 200 miles (321 kilometers) east-southeast of the island late Sunday afternoon as a Category 1 hurricane.

"It appears that Bermuda will be spared a direct impact," said Wayne Perinchief, the national security minister for the British territory. "However, I urge the public to remain cautious as there is the potential for the storm to re-intensify and change track, and we could experience heavy rain and winds in shower bands."

Bermuda residents were already crowding into stores on Thursday to stock up on supplies, while hotels reported cancellations of trips to the island, which is popular with tourists for its pink sand beaches and with businesspeople as an offshore financial haven.

South shore beaches were closed Thursday afternoon as the approaching storm whipped up surf, and residents stocked up on food, propane, tarp, flashlights and water.

"It's great to see people are not waiting until the last minute. We only have three empty shopping carts left at the moment," said Henry Durham, the manager at Gorham's hardware store.

Some people weren't very worried, because Bermuda enforces strict building codes to withstand rough weather. Homes must have walls at least eight inches thick and be able to withstand 150 mph wind gusts. Many power and phone lines are underground.

"The landlord assures me we have a very sturdy roof," said Toby Crawford, a British software developer who moved to Bermuda from London a year ago with his wife, Michelle. "I'm looking forward to it, having not experienced one before."

Michelle Crawford said the couple was prepared to combat boredom being cooped up in their apartment in Pembroke, near the capital of Hamilton.

"I have to admit we've opted for the alcohol route as well. We've heard that people have hurricane parties, but so far Toby and I are just planning to hole up at our house with books, board games and wine," she said.

National Security Minister Wayne Perinchief urged all residents to complete their storm preparations by Friday, when the territory's schools would be closed.

Swells from Leslie were affecting Bermuda, the U.S. East Coast, the northern Leeward Islands, Puerto Rico and the Virgin Islands. The swells could cause life-threatening surf and rip currents.

By Friday evening Rhode Island's Emergency Management Agency warned residents of high surf, strong waves and dangerous rip currents that could pose a hazard to swimmers and surfers for the next few days. State officials say breakers of 12 feet are possible in areas with steeply sloped beaches.

Out in the Atlantic, Hurricane Michael weakened from a Category 3 storm to a Category 2, with maximum sustained winds of 105 mph by late Thursday. Earlier in the day, it had become the first Category 3 of the Atlantic hurricane season.

Early Friday, Michael was moving northward near 3 mph over the open ocean and was not a threat to land. It was about 920 miles west-southwest of the Azores.