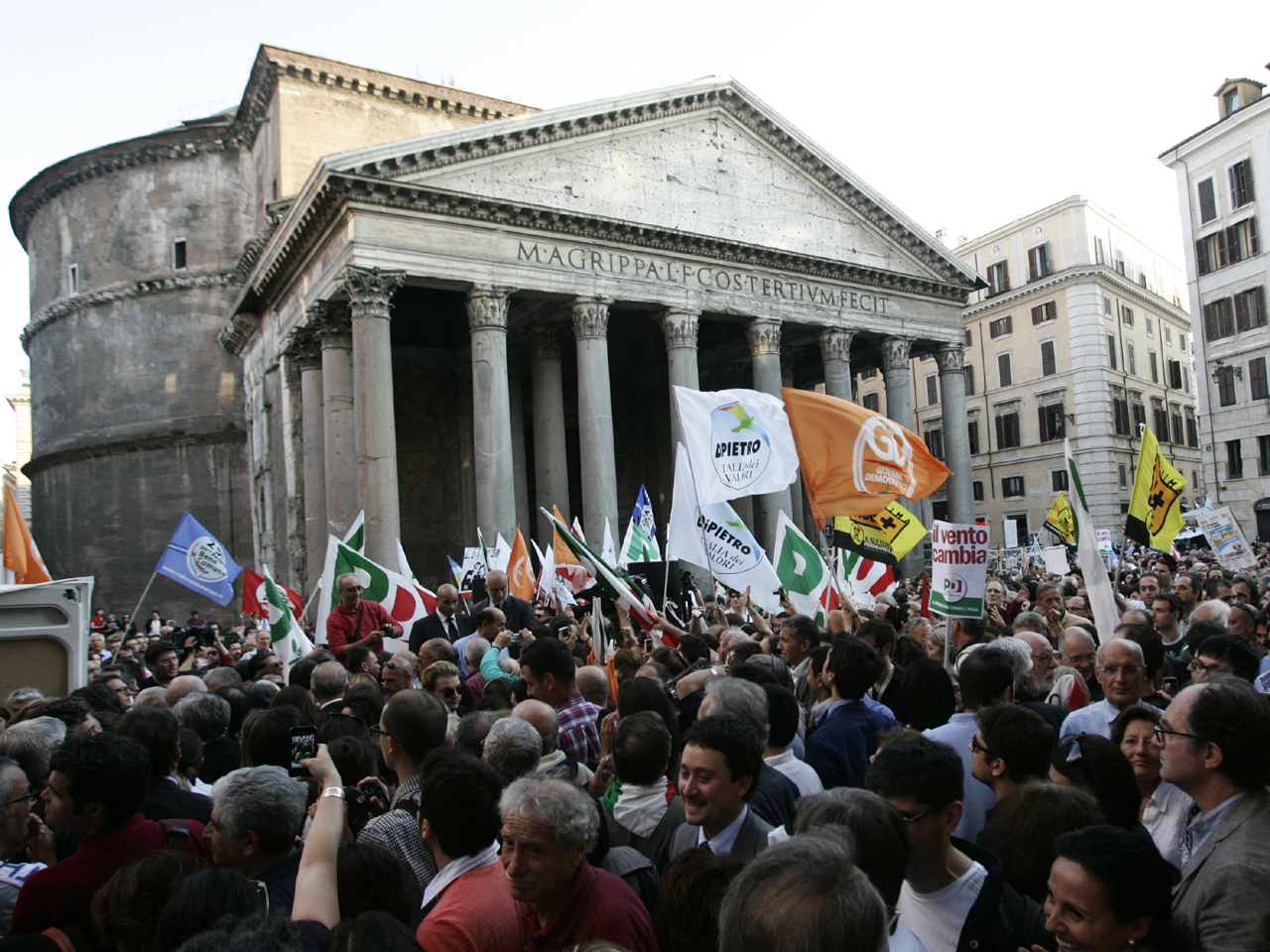 ROME — Premier Silvio Berlusconi acknowledged Monday that his center-right party suffered defeats in his political stronghold of Milan and in the southern city of Naples — outcomes that observers say could undermine his government's stability and his leadership.

Berlusconi had campaigned hard ahead of the local elections and urged Italians to go to the polls to signal their support for his conservative coalition government in Rome.

"This time we didn't win, but we continue. I am a fighter. Any time I have lost, I tripled the effort," Berlusconi told reporters in Romania, where he was on an official visit.

Final results from the runoff elections held on Monday and Sunday appeared to support recent opinion polls that have shown his popularity slipping as he faces a trial in Milan in a prostitution scandal. Critics have said most of his energy has been involved defending himself from charges that he paid for sex with an underage Moroccan teenager then used the premier's office to try to cover it up.

The votes mark a setback for the 74-year-old Berlusconi personally and for his local candidates, analysts say, and will likely raise questions about his leadership.

In Milan, with all polling stations reporting, Berlusconi's candidate, Mayor Letizia Moratti, won about 45 percent of the vote in the runoff against Giuliano Pisapia of the center-left. Milan, Italy's financial and fashion capital and Berlusconi's own power base, had been run by conservative mayors for almost two decades.

The city also is a crucial power base of a key government ally, the Northern League, and the poor showing is likely to deepen rifts between Berlusconi and the League's leader, Umberto Bossi. The League had been critical of the electoral campaign in Milan and lukewarm toward Moratti and it will no doubt be angry about having lost north Italy's most important city.

However, Berlusconi said he had spoken by telephone to Bossi and said the government was solid.

"We will continue together, in the direction of reform," Berlusconi said after the vote.

The government has been criticized for not taking on tough reforms to help stimulate growth. That was one of the reasons that Standard & Poor's recently downgraded the outlook for Italy to negative.

In the Naples run-off, the leftist candidate Luigi de Magistris, a former magistrate, won by a landslide with 65 percent of the vote, compared to 35 percent for Berlusconi's candidate, Gianni Lettieri, according to the final returns.

The center-left has long controlled Naples, but Berlusconi had been hoping to take control of it as the city grapples with a long-standing garbage collection crisis and high unemployment, especially among youths. The premier had repeatedly vowed to clean up the city's streets from piles of garbage and sent soldiers to help do that just before the vote.

"This vote marks a clear defeat of the right, a strategic defeat," said Stefano Folli, a top political analyst. "It gives the sense that Berlusconi's political season is drawing to a close," he said. "Let's see if he will be capable of handling his own succession."

An opposition candidate also won the race for mayor in the Milan suburb of Arcore where Berlusconi has a villa, dealing a defeat to a Northern League candidate — an embarrassment for the Italian leader if not a politically significant race.

Berlusconi's allies acknowledged the defeat but sought to downplay any national political repercussions.

"We are not on the eve of the end of Berlusconi, or of the Berlusconi season, or of the government," said Fabrizio Cicchitto, an ally of the premier. "There's a huge difference between local elections and political elections," he said, adding that the success of local candidates does not always translate into votes at general elections.

But he conceded, "We are faced with a necessary political reflection."

Berlusconi went on trial in April on charges that he paid for sex with an underage Moroccan prostitute and tried to cover it up by using his influence. The trial continues on Tuesday.

The latest ballots were his first electoral test since the trial opened. Another three court cases — all related to his business — are under way against him in Milan. He has denied all the charges.

On Monday, Berlusconi faced another judicial investigation, this time in relation to the electoral campaign.

The premier took to the airwaves so aggressively ahead of the run-offs that on one day he appeared nearly simultaneously in interviews on almost all the national newscasts. Opponents claimed that this violated Italian regulations that state equal time must be given to all parties during electoral campaigning, and they filed a complaint.

As a result, Berlusconi was placed under investigation for abuse of office, along with the heads of some of the newscasts. Prosecutors are obliged to open an investigation following such a complaint.

The run-offs were called for candidates who had failed to capture more than half the vote in the first round two weeks ago. In the first round, Berlusconi's opponents retained control of two other important cities in the north: Turin and Bologna.

In all, more than 5.5 million Italians were eligible to vote in the run-offs to elect mayors and other local representatives across Italy. Turnout in the run-offs for mayoral races was 60 percent, but in Milan it was higher — 67.2 percent — in a sign of how significant the race was.