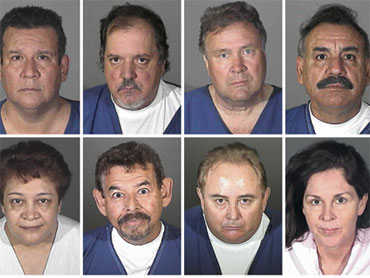 The scandal-plagued city of Bell mismanaged more than $50 million in bond money, levied illegal taxes and paid exorbitant salaries to its leaders, according to a state audit released Wednesday.

The audit was released a day after eight current and former officials of the blue-collar Los Angeles suburb were arrested for misappropriation of public funds and other charges.

The audit said disgraced former city manager Robert Rizzo had total control of city funds and used some of the money to inflate his salary and pay off personal loans.

"Our audit found the city had almost no accounting controls, no checks or balances, and the general fund was run like a petty cash drawer," state Controller John Chiang said in a statement. "The city's purse-strings were tied to only one individual, resulting in a perfect breeding ground for fraudulent, wasteful spending."

The audit was requested by interim city manager Pedro Carrillo. A call by The Associated Press to Carrillo seeking comment was not immediately returned.

However, he told the Los Angeles Times the report provided more proof that Rizzo was manipulating the city"

"We look forward to continuing to work with the controller to make sure that there aren't other irregularities," Carrillo said.

Rizzo was making nearly $800,000 a year when he resigned earlier this year. The figure was almost twice as much as President Barack Obama is paid.

All were scheduled for arraignment Wednesday but CBS News has learned all parties have agreed to postpone the arraignment until October 21.

A hearing is scheduled for the defendants currently being held on bail.

The eight suspects were charged with misappropriating $5.5 million in public funds. However, the audit questioned well over $65 million in city expenses.

- Exorbitant salaries were approved for city leaders without required performance reviews. In the past year alone, the city spent more than $5.8 million on compensation for the mayor, City Council members and six top administrators.

- Rizzo used more than $93,000 to repay two personal loans and approved $1.5 million in loans to other city workers even though no city ordinance permitted it.

"The controller's audit has determined all of these loans to be gifts of public funds, as they provided no public benefit," the audit statement said.

- The city paid $10.4 million to two development firms owned by a contractor who also was the city's director of planning services.

- The city made a $4.8-million land purchase from a former mayor without documenting how the land would be used. No work has been done on the property, which contains a vacant store.

- The city mismanaged $50 million in bond funds approved by voters in 2003. The city issued the funds without any plan to use the money or any apparent need for the money.

Among other things, more than $23.5 million of the bond money went into a non-interest bearing account where it was sitting unused as of last month. Much of the money was designated for the Bell Sports Complex, but the audit found no plans for developing it.

"After six years, the city has a dirt lot with a masonry wall," the controller's office said.

The controller's office plans to release another report next month on the city's handling of state and federal funds. A third audit to be released in November will address financial reports that an outside accounting firm prepared.

Since the scandal broke, public officials, city managers and others have said the situation in Bell showed why people must insist that elected officials communicate honestly and openly.

Interim City Attorney Jamie Casso said he expected Bell could carry on business as usual, adding that Carrillo and Lorenzo Velez — the one council member who wasn't arrested — were meeting regularly. Velez was not taking a high salary.