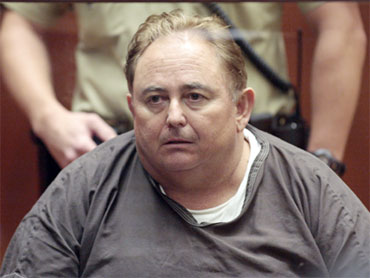 The mayor and former city manager of Bell were led away in handcuffs Tuesday, charged with six other officials with taking more than $5.5 million from the working-class suburb in a scandal that triggered nationwide outrage and calls for more transparency in government.

Former City Manager Robert Rizzo, Mayor Oscar Hernandez and the other current and former city officials were rounded up during morning raids on their homes that prompted many of their neighbors to burst into cheers.

They were charged with dozens of counts of illegally paying themselves huge salaries in what District Attorney Steve Cooley called a case of "corruption on steroids."

"They used the tax dollars collected from the hardworking citizens of Bell as their own piggy bank, which they then looted at will," Cooley told a news conference as he stood next to photos of the eight suspects.

In Bell, where one in six residents lives in poverty, people began honking their horns at the news of the arrests. At City Hall, dozens gathered to laugh and applaud as someone played the Queen song "Another One Bites the Dust."

"From day one, we've been asking, 'Why aren't these individuals in jail?'" said resident Christina Garcia. "I think today everyone's feeling vindicated for everything they've been doing."

Rizzo, who was making nearly $800,000 a year, was booked on 53 counts of misappropriation of public funds and conflict of interest. Messages left at his home and with his attorney were not returned.

He and the others were scheduled to be arraigned Wednesday, with officials seeking bail amounts ranging from $3.2 million for Rizzo to $130,000 for former Councilman George Cole. The amounts were based on how much authorities believe each person took.

"I seen them take out Mirabal in handcuffs," longtime resident Hassan Mourad said after the arrests. "I seen them drag him out."

At the mayor's house, police briefly used a battering ram when Hernandez didn't immediately come to the door.

Former Police Chief Randy Adams, who was also scrutinized in the salary scandal, was not arrested.

Cooley, who knew Adams when he was the police chief in Glendale, said there was no evidence Adams illegally obtained his $457,000 annual salary. The figure was $150,000 more than the Los Angeles chief of police gets paid.

"Being paid excessive salaries is not a crime," Cooley said. "Illegally obtaining those salaries is a crime."

Authorities said Rizzo made $4.3 million by paying himself through different employment contracts that were not approved by the City Council. Meanwhile, council members paid themselves a combined $1.25 million for what Cooley called "phantom meetings" of various city boards and agencies.

Rizzo also was accused of giving $1.9 million in loans to himself, Spaccia, Hernandez, Artiga and dozens of others.

Cooley said his investigators have pored over more than 60,000 pages of documents and more people could be arrested.

Since the scandal broke, public officials, city managers and others have said the situation in Bell showed why people must insist that elected officials communicate honestly and openly with them.

"One of the problems that was obvious with Bell was the lack of transparency and the lack of involvement on the part of the public," Dave Mora, West Coast regional director of the International City/County Management Association, said recently.

Cooley praised the Times, saying the scandal occurred in part because residents and much of the news media paid little attention to what was happening at Bell City Hall until the story broke.

Rizzo, Adams and Spaccia resigned and the council members reduced their salaries to about $8,000 following the disclosures.

The four council members, who are currently the target of a recall, would be forced to resign their positions if convicted, Cooley said.

"It is clear that Rizzo and Spaccia were at the root of the cancer that has afflicted the city," he said.

Interim City Attorney Jamie Casso said he expected Bell could carry on business as usual, adding that Carrillo and Lorenzo Velez — the one council member who wasn't arrested — were meeting regularly. Velez was not taking a high salary.

The district attorney's office is one of several agencies investigating Bell.

Last week, Attorney General Jerry Brown sued eight current and former officials of Bell, accusing them of defrauding taxpayers by granting themselves salaries he said were far higher than warranted for the jobs they were doing.

Artiga was not named in the lawsuit but Adams was.

Earlier this month Bell officials confirmed the city was also the target of a racial profiling investigation by the federal government for allegedly targeting young Hispanic drivers for traffic stops to raise revenue.