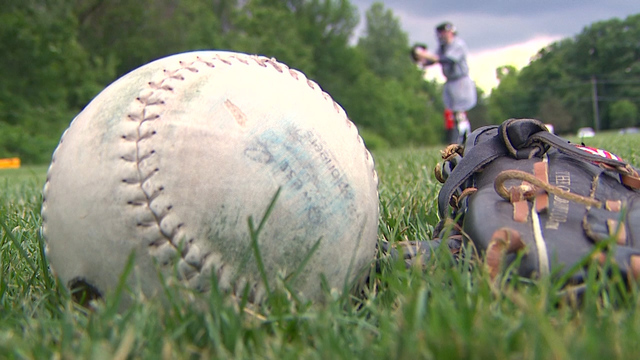 A baseball tournament unlike anything you've ever seen - or heard - was held in Indianapolis this weekend. The game is "beep baseball" and it uses sounds to help visually impaired players connect with the ball.

CBS Indianapolis affiliate WISH TV was there to report on the fun. Marc Morris, in his second year on the team, told reporter Jessica Hayes, "When I was told about this sport, I was very enthusiastic and very ready to participate... If you want to play a competitive sport and you're willing to put in the time, you can absolutely do it."

Morris and others who are blind and visually impaired played in a round robin tournament against teams from St. Louis, Cleveland and Chicago.

Beep baseball games consist of 6 innings. Six players take to the outfield along with spotters to help guide them to the ball. Teams pitch to their own batter.

And what's really unique is that the ball and the bases make distinct sounds so players know where to swing and where to run. The ball beeps continuously during play.

Players don't circle the bases like in traditional baseball. Instead, if the outfielder picks up the ball before the batter reaches the base, the batter's out. If not, the batter scored a run.

"We take it very seriously," says Indianapolis Thunder General Manager and pitcher Darnell Booker. "In between the lines, it's competition, but afterwards, it's the camaraderie of the teams getting together, congratulating, things like that, but it's a very competitive sport." He has played in the league for over a decade.

Booker points out, "Just because you're blind or visually impaired doesn't mean you can give up on life, give up on sports."

The World Series of beep baseball will be held in Minnesota in August.

Facebook is used to promote tobacco, despite policies against it