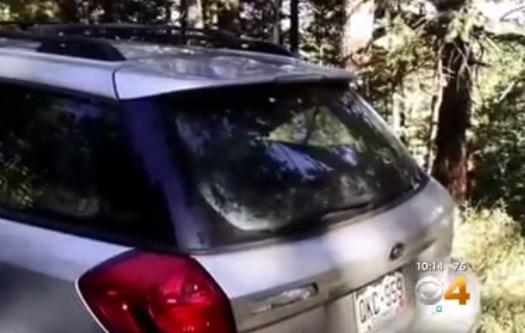 JEFFERSON COUNTY, Colo. -- Campers are being warned to keep food secure after a curious bear opened the back hatch of an SUV in Colorado and spent the night inside, trying to get out, CBS Denver reported.

"She said 'Annie, there's a bear in your car.' And I thought she meant it had broken a window and I was like 'Okay, that's life,'" said Annie Bruecker, who woke up to an unexpected surprise after camping at Chief Hosa Campground Monday night.

It wasn't the call a pair of Jefferson County Sheriff's Office deputies were expecting around 9 a.m. Tuesday.

"Never inside a car before. I've had bears inside a house but usually they're gone before we get there. ... This is the first one he's still been there when I got there," said Deputy Josh Tillman.

He and Deputy Brian McLaughlin captured video of the release.

"When we surprised him he batted the rear window at us which scared us both. He had to have opened the door," said McLaughlin.

Bruecker said all her car windows and doors were closed.

"When the door came open the bear jumped out kind of in my direction. I made a loud yell at him and it startled him and he took off the other direction like we wanted him to," said Tillman.

The bear was unharmed, but the same can't be said for Bruecker's car.

"My whole ceiling was ripped, the plastic from my sunroof cover was ripped out. My steering wheel was chewed, as was every other piece of my car," she said.

It was towed and is likely a total loss.

"I'm kind of sad, and a little mad," said Bruecker.

Items inside may not be salvageable.

Bruecker said she had picked up some food within the past day, but it had been removed from the car. The only other thing the bear could have been after was a crushed can of lemonade.