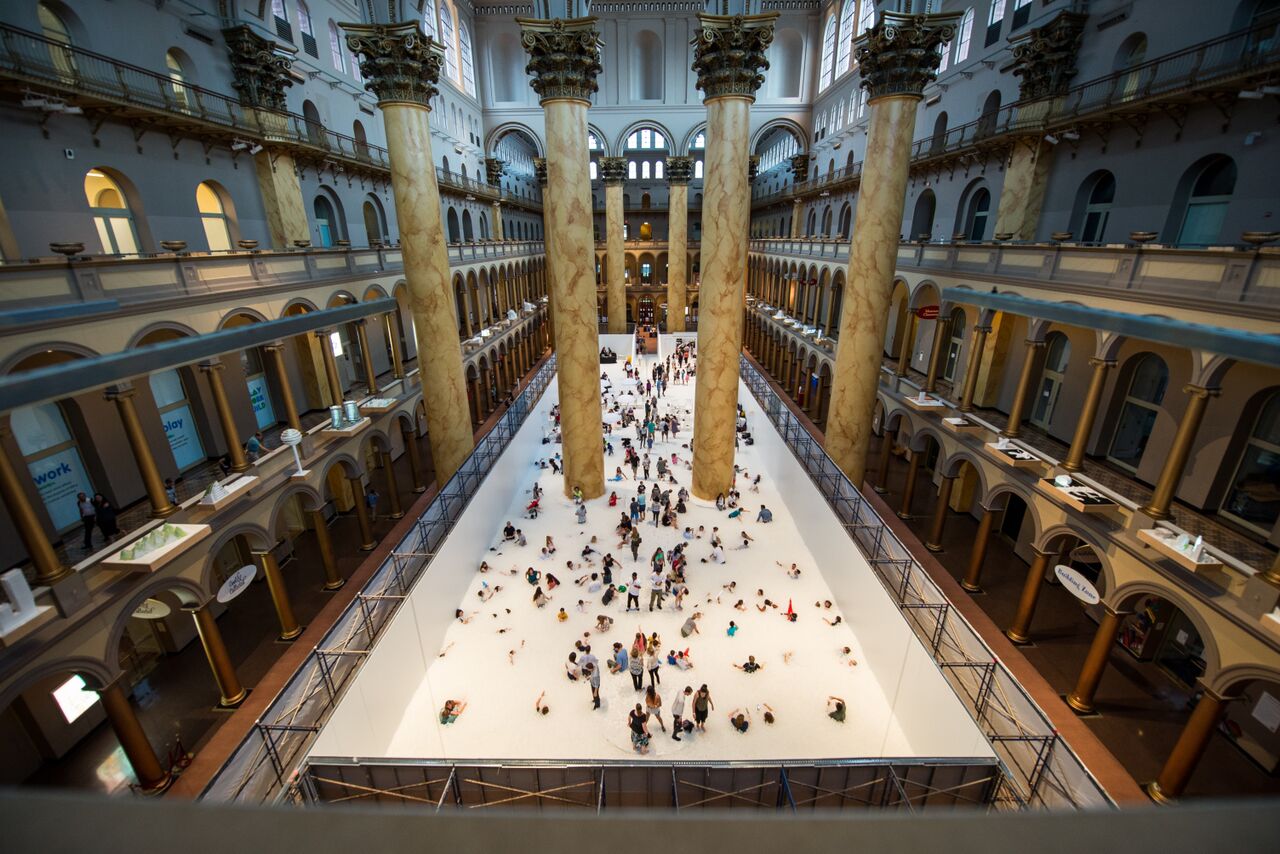 There's no water or sand, but visitors at the National Building Museum are enjoying a beach experience in the heart of Washington, D.C., reports CBS News correspondent Chip Reid.

Thousands of tourists and residents are lining up to play in an ocean of 750,000 plastic balls that look up at some of the largest indoor Corinthian columns in the world.

You won't drown, but get ready to go under, whether you want to or not.

"It's much more difficult than it looks," one visitor said.

Kids aren't the only ones having fun though. Adults enjoying the experience are called "kidults."

More than 100,000 people have visited so far this summer. It's so popular, they don't mind waiting in long lines, according to the National Building Museum's director Chase Rynd.

"People are smiling, and what's really amazing to me is there have been waits as long as two hours to get in, and when they leave they thank us," he said.

It took about two weeks to create the indoor beach, the brainchild of Snarkitecture, a company that makes public displays that are somewhere between architecture and art.

"A lot of our work sort of invites play and invites interaction and accessibility to a really wide audience, including children," co-founder Alex Mustonen said.

And anyone queasy about all those people rolling around together need not worry.

"The balls are actually coated with an antimicrobial surface," Mustonen said.

It's called Germblock. If you have a thing about germs, Mustonen said you can relax.

On Wednesday evenings, the average age goes up -- at least a little.

Music by the Aloha Boys recently made it feel like a Hawaiian luau.

For parents, it's a chance to relax on the beach without worrying that their kids are out in the ocean.

"It's fantastic. We have music, we have beverages, the kids are playing, it's wonderful," one parent said.

If you're wondering why anyone would come do this instead of going to a real beach -- from D.C., the beach is three hours away.

"It's the best commute to the beach ever; I mean, this is great," one person said.

And as another visitor said -- no sharks to worry about.

"There's like no shark attacks or any animals that can hurt you," he said.