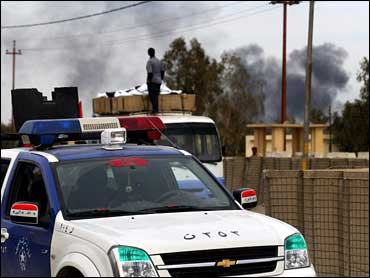 Authorities said Iraqi soldiers supported by U.S. aircraft fought all day with a large group of insurgents in the Zaraq area, about 12 miles northeast of the Shiite holy city of Najaf.

Col. Ali Nomas, spokesman for Iraqi security forces in Najaf, said more than 250 corpses had been found. Iraqi army Maj. Gen. Othman al-Ghanemi also spoke of 250 dead but said an exact number would not be released until Monday. He said 10 gunmen had been captured, including one Sudanese.

Provincial Gov. Assad Sultan Abu Kilel said the assault was launched because the insurgents planned to attack Shiite pilgrims and clerics during ceremonies marking Ashoura, the holiest day in the Shiite calendar commemorating the 7th century death of Imam Hussein. The celebration culminates Tuesday in huge public processions in Karbala and other Shiite cities.

Officials were unclear about the religious affiliation of the militants. Although Sunni Arabs have been the main force behind insurgent groups, there are a number of Shiite militant and splinter groups that have clashed from time to time with the government.

Iraqi soldiers attacked at dawn and militants hiding in orchards fought back with automatic weapons, sniper rifles and rockets, the governor said. He said the insurgents were members of a previously unknown group called the Army of Heaven.

"They are well-equipped and they even have anti-aircraft missiles," the governor said. "They are backed by some locals" loyal to ousted dictator Saddam Hussein.

Abu Kilel said two Iraqi policemen were killed and 15 wounded, but there was no word on other Iraqi government casualties.

A U.S. statement said the American helicopter went down while "conducting operations to assist Iraqi Security Forces" in the attack. It said two crew members died and their bodies were recovered. The statement did not give any information on why the aircraft crashed.

It was the second U.S. military helicopter to do down in eight days. Twelve U.S. soldiers died Jan. 20 when a Black Hawk crashed northeast of Baghdad. The Army says it is investigating the cause, but a Pentagon official has said debris indicated it was downed by a missile.