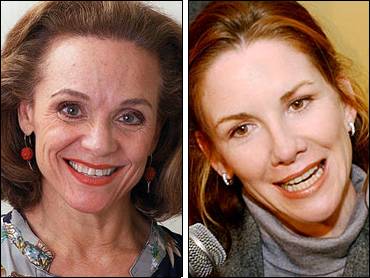 Two television stars of the 1970s are battling over control of the nation's biggest actors union.

Harper, who received 10,692 votes to 12,280 for Melissa Gilbert ("Little House On The Prairie"), said it was unfair that nearly 4,800 New York ballots lacked a signature line, in violation of a SAG rule. The remaining 73,800 ballots were properly formatted.

Harper also was angry that some members may have learned too late about a two-day extension for the receipt of New York ballots and complained that some of SAG's professional staff may have improperly assisted campaigns.

"It's very clear that members have been cheated out of an election that we can believe in," Harper said. "This entire election is tainted by people we hired (to conduct the balloting) and by some of our staff."

"This step is based on our disturbance over the legitimacy of the election itself and not in terms of individual races," Harper said. "So many voters are questioning how this election was conducted."

Harper said she was joining two supporters who won key posts in the union elections this month — Elliott Gould ("M*A*S*H" and other movies) and Kent McCord ("Adam 12") — in drafting a formal challenge that will be filed this week.

Harper is a supporter of William Daniels, the incumbent union president who advocated a tougher stance in labor talks, against dissidents who saw his leadership as too militant.

The new leadership of the 98,000-member union is due to assume office next Monday, and the union's election committee is expected to meet next week to consider challenges to the balloting. At least two union members already have formally contested the election, and several others reportedly plan to follow suit by Friday's deadline.

Harper said her challenge was not about union politics but about ensuring a fair election.

"It's not about Melissa and my race, and it's not about Elliott and the people he beat," Harper said. "You have people who won races and people who lost races challenging this election."

"This is obviously not about winning or losing," said McCord, now co-star of the science fiction TV series "Farscape." "It's about preserving the rules that exist."

Harper, currently appearing on Broadway in "The Tale of the Allergist's Wife," sprang to fame as the wisecracking sidekick on "The Mary Tyler Moore Show" before starring in the spinoff comedy "Rhoda."

Gilbert, only the third woman elected president of SAG in its 68-year history, has said she was unperturbed by the controversy. A union spokesman said she intended to "continue as president until some legal authority tells her se's not."

The main complaint aired by Harper and others is that the 25,000 ballots mailed out to New York-area members lacked the signature line and instructions that were included on the 73,000 ballots sent to West Coast members.

The company hired to conduct the election, Sequoia Voting Systems, has acknowledged leaving off the signature line in violation of SAG's election rules and its contract with Sequoia.

Harper and supporters also are contesting a two-day extension of the deadline for submission of returned New York ballots from New York members.

"This activity in New York violates SAG members' rights to be treated equally in union voting," Harper said. She suggested that the discrepancies in balloting may have been deliberate and that some SAG professional staff played a role in the irregularities. She also alleged "widespread staff involvement in backing one candidate over another," contrary to union rules requiring staff to remain neutral in SAG campaigns.

The election took place during a time of discord within the union's ranks, following a lengthy commercial actors' strike last year and a barely averted walkout by movie and TV actors earlier this year.