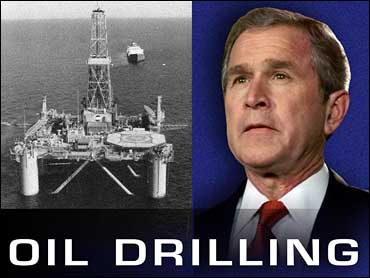 A federal appeals court is considering a Bush administration request to allow the resumption of oil and gas drilling in certain off-shore California tracts. CBS News Correspondent Jerry Bowen reports that has stirred up a hornets' nest of opposition.

The offshore oil rigs stand as symbols from another age off the southern California coast, some two dozen oil rigs pumping oil in sight of Santa Barbara and nearby beach communities.

Now the Bush administration is in court fighting for the right to add to their numbers, to permit oil companies to explore for natural gas and oil on 36 old sites they leased decades ago at a cost of more than one billion dollars.

"These are leases that go back as far as 1968," said Interior Department spokesman Mark Pfeifle. "Now we're trying to find solutions to it in an environmentally-responsible way that works on a case-by-case basis."

The state of California and a coalition of environmental groups are strongly opposed.

"This issue is about protecting or not protecting California's coast," said Drew Caputo of the Natural Resources Defense Council. "The California coast ought to be protected for the millions of Californians and others who love the coast and who live and recreate and do business there."

The oil leases in question were purchased before a ban on new drilling off California went into effect in 1990 — a ban imposed, ironically, by the first President Bush. The current administration says it has no intention of overturning the ban, but critics are skeptical:

"These old oil leases which have never been developed, in the Bush administration's view, can sort of sneak in under the wire and serve as an excuse for new and risky oil drilling on the coast," charged Caputo.

Opponents cite the 1969 Santa Barbara oil spill as evidence of what can go wrong. Three million gallons of oil fouled the waters, tarred local beaches and killed wildlife. The oil companies and the administration say these are different times.

"We can produce energy reserves in an environmentally-friendly way without any new oil exploration off the shore of California," said Pfeifle.

Congress now may help make that happen: There's a bill to let the oil companies swap their controversial California leases for oil fields off Louisiana in the Gulf of Mexico. California would get a drilling ban, Louisiana would get jobs. But the bush administration's lawsuit is likely to continue, both sides saying it defines the important issue over who can control America's coastlines.