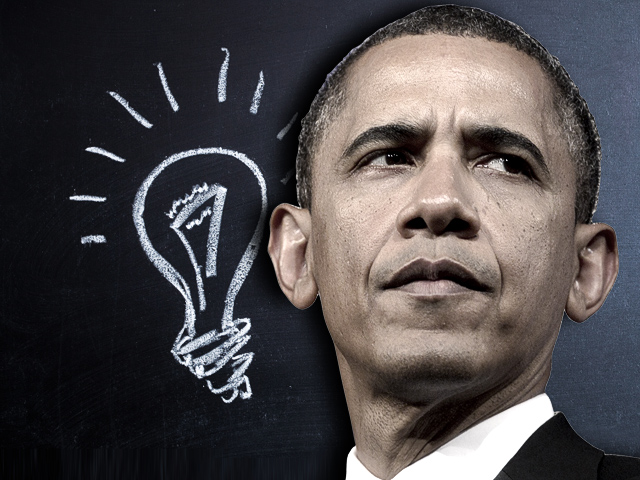 A little less than a year ago, Republicans and Democrats found rare cause to pass a bill through Congress with bipartisan support: Months before an election that was expected to be exceptionally tight, neither party could afford to willfully sacrifice the vote of young people, and a political battle was brewing over Democratic efforts to prevent student loan rates from doubling. On June 29, 2012, after an aggressive Democratic push, Congress passed a bill to extend the low rates already in place for another year.

On Friday, President Obama held an event at the White House to pressure Congress to take action before rates double on July 1.

The president touted previous initiatives that have expanded student aid and reformed the student loan system, saying, "We're doing what we can, but here's the thing: if Congress doesn't act by July 1, federal student loan rates are set to double...leading to an additional $1,000 in debt" for graduating students.

"Anybody here can afford that?" the president asked the audience before answering his own question: "No."

"Unfortunately," he added, the House bill "fails to lock in low rates for students next year. That's not smart. It eliminates safeguards for lower income families. That's not fair. It could actually cost a freshman starting school this fall more over the next 4 years than if we did nothing at all."

"I'm glad the House is paying attention to it but they didn't do it in the right way," the president said. "So I'm asking young people to get involved and make your voices heard once again."

An aide to House Speaker John Boehner, R-Ohio, countered in an email: "By passing a bill, House Republicans put themselves in a strong position moving forward. Senate Democrats will have little leverage unless they can pass a bill of their own. What's the Senate Democrat and White House's plan to resolve this? It doesn't appear they have one, so the president is out barnstorming to distract from a genuine failure of his own government and party."

Publicly, House Republicans are digging in in support of their own plan, and Senate Democrats are offering up yet another proposal - guaranteeing a fraught series of negotiations with no obvious compromise in sight.

Last week, House Republicans passed a bill that would prevent loan rates from doubling to 6.8 percent, from the current 3.4 percent, when the existing bill expires July 1. But that bill, which would tie the rates to the 10-year Treasury note, would also allow lending rates to reset each year. Stafford loans would be capped at 8.5 percent, and loans for graduate students and parents would be capped at 10.5 percent.

The president's plan would also tie the rates to the Treasury note, but it would keep the rates fixed at a single rate throughout the loan's lifetime, and would reform repayment options to guarantee that student borrowers don't have to pay more than 10 percent of their discretionary income on repayment upon graduation.

"While we welcome that House Republicans have paid some attention to this issue this year, their proposal, unfortunately, does not meet the test," Carney told reporters on Wednesday. "It fails to lock in low rates for students while also eliminating a safeguard that provides middle-class families most in need with lower interest rates for student loans. And it raises rates of students for deficit reduction instead of taking on closing loopholes and tax breaks for the well-off and well-connected."

Boehner defended the House GOP plan last week as a "responsible way to deal honestly with the issue of student loans," but, he added: "Can somebody politicize this on the other side of the aisle? Certainly they can."

Some advocates for student borrowers argue that, really, both sides are playing politics - and that ultimately, students are the losers in this debate.

"Last year the interest rate issue became a political football, and luckily we won the game," said Chris Lindstrom, the Higher Education Program Director for U.S. PIRG, a nonpartisan consumer advocacy group. "This year it's just much tougher, because there isn't that larger struggle that focuses the public eye on the issue the way the election did for the issue last year."

Lindstrom argues that both plans are bad enough that student borrowers would be better off if the current law expired and student rates doubled to 6.8 percent.

"I do think there's a chance that the rates will just go up," Lindstrom said. "Sadly, I think that that might actually be the best thing for borrowers, compared to the type of deal that they would be saddled with if the president's plan or the plan that passed the House went into effect."

Lindstrom says Mr. Obama's plan would keep rates low for a few years but then spike down the road, in part because some elements of the proposal consumer advocacy groups like hers favor - such as the income-based repayment program the administration has been touting -- would actually be paid for through the interest rates.

"The president's plan delivers really low rates and keeps the rates low for the first several years, but then very quickly, the rates start to increase - and the increases are there to pay for artificially depressing the rate in the beginning years," she said. That means that students would benefit in the short term, but that younger kids would bear a heavier burden than, for instance, their older siblings.

The Institute for College Access and Success (TICAS), an independent nonprofit organization that seeks to make higher education more accessible, argues that the president's plan is a "mixed bag" for students. While the White House proposal fully funds Pell Grants, makes permanent the American Opportunity Tax Credit, expands upon the income-based repayment program, and lowers interest rates on federal loans for students and parents who borrow this fall, it does so "by letting interest rates rise steeply for students and families who borrow in the coming years."

Meanwhile, the House Republican bill, TICAS argues, includes "many of the right goals" but ultimately would cause interest rates on certain federal student loans to "nearly double" by 2016 - and "more than double" by 2017, "not just on new loans but on all loans issued this coming school year or after."

TICAS has its own proposal, which involves fixing the rates to the market as long as that rate is capped in a way that protects students from facing sky-high rates.

Some Democratic lawmakers have expressed an openness to that kind of proposal - but that's not what they're pushing in the Senate. Instead, Sens. Tom Harkin, D-Iowa, Jack Reed, D-R.I., and Senate Majority Leader Harry Reid, D-Nev., proposed extending the existing law until the debate over student loan rates can take place in the broader context of the reauthorization of the Higher Education Act, which expires at the end of this year.

One Senate Democratic aide told CBSNews.com they couldn't comment on Mr. Obama's proposal before he actually lays out specifics about potential legislation, but the aide suggested that the Democratic focus in the Senate is on pushing through the bill they've outlined. The aide did say that while Harkin is open to the idea of a variable rate, having a cap on that rate, and the level of that cap, is critical to any conversation that may ensue. In the meantime, though, he's pushing for his own legislation.

"[The] two-year extension is the most viable way forward to ensure that college remains within reach for students who rely on federal loans to pay for their education and will allow us to develop an interest rate policy in a careful and thoughtful way within the context of the reauthorization of the Higher Education Act," Harkin said in a statement last week.