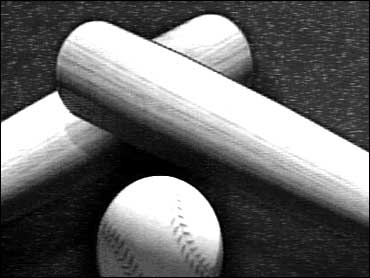 Thirty years ago, sandlots and ballfields nationwide turned to aluminum bats as a more durable and cheaper alternative to traditional wood bats. But over the years, there has been a growing debate over whether aluminum bats make the game of baseball more dangerous.

In light of this, Massachusetts may soon become the first state to ban aluminum bats in high school play for next season. CBS News Correspondent Jim Acosta reports on the move and author Eric Small offers safety tips.

Responding to line-drive injuries involving aluminum bats at the college and high school levels, Massachusetts has started what may become a baseball revolution, as one sportswriter put it, "firing the shot heard 'round the sporting world." The state will bench all metal bats in high school tournament play later this spring.

"There's no doubt that the ball comes off the aluminum bat faster than off wood," said Amherst College Baseball Coach Bill Thurston. He likes the state's call and claims aluminum bats act much like trampolines.

"If you are struck by a batted ball that's going faster, there is a greater chance for a more severe injury," he said.

Consider the numbers. Between 1991 and 2001, 17 players were killed by batted balls in amateur and pro play. Two were from wooden bats. But eight were from aluminum bats. It's unknown what kind of bat caused the rest.

Aluminum is already out in some Little Leagues games, even though the experts don't see metal bats as much of a risk at this slower moving level.

Aluminum bat makers counter they've redesigned their products in recent years to limit that exit speed to 97 miles per hour, the same as the best wooden bat.

Jim Darby, vice president of bat manufacturer Easton Sports says, "Is that an unsafe product? No. Why? Because it's very similar to wood."

High school coach Frank Carey argues there are other statistics to consider.

Carey warns that scholastic teams across Massachusetts may have to call it quits if they're forced to switch to wood.

"When my school has cut off funding for substitute teachers, textbooks, things of that nature, you can't justify paying $2,000 for wood," Carey says.

Back at Amhurst College, Thurston also believes the more durable aluminum bats increase the chances of a getting a hit.

Wood bats are far less forgiving. They can break and their so-called sweet spot is smaller, making solid contact more difficult for batters.

Coach Carey notes people do not ski with wooden skis, "Technology has improved the products of all those sports to make it easier to perform and makes it better for the participant."

But fair or foul, players are having little say in this debate's outcome.

Dr. Eric Small, author of the book, "Kids and Sports" says when it comes to playing sports, safety is a main concern. "If there's a potential danger in using aluminum bat or some product, we have to investigate and make sure it's the safest product it can absolutely be," he says.

Injury rates may be higher during kids' peak growth spurt, he says. "Around 11 or 12, they're much stronger and they're bigger," he says, suggesting they be prevented from using an aluminum bat, which may produce more velocity, at that age. Younger kids probably would not be affected, he says.

Small says the type of bat used has no effect on the most serious ball injury. "What happens when a ball is thrown, it hits the small chest wall in a child," he says. "It can strike the heart in a certain part of the cardiac cycle, leading to arrhythmia and death. And that's really not preventable even with chest protectors."

As in any sport, there is always an inherent danger. But here are some tips he offers parents to make sure their kids have a safe spring sport season:

It kids do get injured, he says it important to make sure they have "full strength, range of motion, and balance before they're playing."