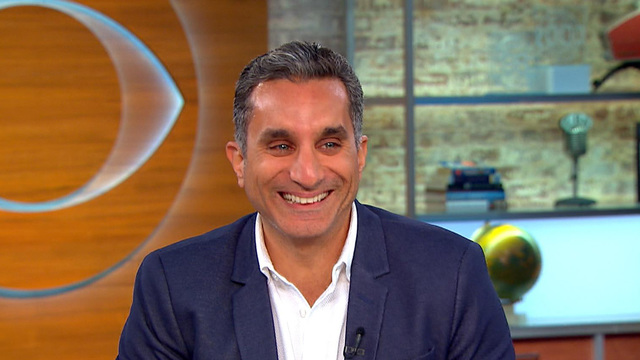 Bassem Youssef is well known as the "Jon Stewart of Egypt" for his comedy show, "Al Bernameg," nicknamed "The Daily Show" of the Middle East. It was actually Jon Stewart himself who inspired Youssef to ditch his career as a heart surgeon to host his own comedy show in Egypt during the 2011 Arab Spring.

"Al Bernameg" became one of the most-watched shows in the Middle East, garnering an estimated 30 million weekly viewers. But in 2014, Youssef left it all behind, citing political pressure and safety concerns for his family. He has since moved to California and in his latest project he takes a jab at American politics in a 10-part web series for Fusion called "The Democracy Handbook." The timing couldn't have been more perfect.

"When I went out in the field and I spoke, for example, to Trump supporters, it kind of resonated with me because I heard the exact same things back home with empty, fake patriotism, demagogic speeches, empty rhetoric," Youssef told "CBS This Morning" Thursday. "It's as if we are talking in an echo chamber. It doesn't make sense... but it does for them."

While the idea of a Donald Trump presidency is troubling to some -- including some members of his own party -- Youssef said it's "not the worst thing."

"I'm not worried about Trump, I'm worried about what's behind Trump," Youssef said. "I mean, Trump is one person, but the support he has massed, what he's coming from -- I mean if Trump is saying racist, stupid stuff out of making a show, there are other people... in the Republican party who said this out of conviction. I mean the stuff that Marco Rubio, Ben Carson and Ted Cruz said about Arabs are even worse."

In addition to the presidential election, "The Democracy Handbook" -- which debuts Thursday, July 14 -- also looks at a range of other topics, from guns to free speech. As a Muslim and Arab, Youssef aspires to bring new perspective for the American audience.

"I think what I want to achieve with this new show, first of all, is to have people think about topics in depth in a different way from a different perspective," Youssef said. "And second, I'm an outsider. I'm a Middle Eastern with a very obvious accent. I hope people accept me to talk about their issues."

But this also comes at a time of heightened fears and anti-Muslim sentiments in the wake of recent terrorist attacks. For example, in one clip of the show, Youssef has a conversation with a gun shop employee, who makes several anti-Muslim remarks, oblivious to Youssef's Muslim identity. But Youssef maintains his cool by letting "him hang himself with his own words."

"He was saying all these horrible things about Arabs and Muslims," Youssef said. " I mean this is the thing that you do with hateful people -- you just let them speak and expose themselves."