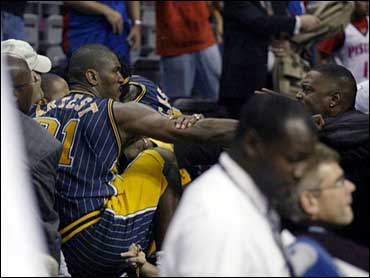 The NBA suspended Ron Artest, Jermaine O'Neal and Stephen Jackson of Indiana and Ben Wallace of Detroit on Saturday for taking part in one of the ugliest brawls in U.S. sports history.

The suspensions were indefinite, and the league was still investigating Friday night's melee involving fans, which commissioner David Stern called "shocking, repulsive and inexcusable — a humiliation for everyone associated with the NBA."

The league issued a statement saying it was reviewing rules and security procedures "so that fans can continue to attend our games unthreatened by events such as the ones that occurred last night."

Artest, O'Neal and Jackson — all of whom threw punches at fans during the fight at the end of Friday night's nationally televised Pacers-Pistons game — were to begin serving their suspensions Saturday night, when the Pacers played a home game against Orlando.

Wallace's suspension will begin with the Pistons' next home game, Sunday night against the Charlotte Bobcats.

Pistons spokesman Tom Wilson said Saturday the team plans to use "playoff-level security" starting with that game, doubling the number of armed police and increasing arena security by about 25 percent, though he couldn't say how many police and security that would be.

"Our investigation is ongoing, and I expect it to be completed by (Sunday) evening," Stern said in his statement.

The brawl was shocking, with Artest and Jackson bolting into the stands near center court and throwing punches at fans after debris was thrown at the players. Later, fans who came onto the court were punched in the face by Artest and O'Neal.

Wallace began the fracas by delivering a hard two-handed shove to Artest after Wallace was fouled on a drive to the basket with 45.9 seconds remaining. After the melee broke out, the referees called off the remainder of the game.

"This demonstrates why our players must not enter the stands, whatever the provocation or poisonous behavior of people attending the games," Stern said.

"It's the ugliest thing I've seen as a coach or player," said Pistons coach Larry Brown, who was in the middle of the confrontation, trying to break it up.

After several minutes of players fighting with fans in the stands, a chair, beer, ice, and popcorn were thrown at the Pacers as they made their way to the locker room in one of the scariest brawls in an NBA game.

"I felt like I was fighting for my life out there," Pacers coach Rick Carlisle said. "I'm sorry the game had to end this way."

The Palace announcer said the game was being stopped and pleaded with fans not to throw things.

It all started when Detroit's Wallace went in for a layup and was fouled hard by Artest from behind, and escalated when Artest stormed into the stands after being hit by a full cup.

After being fouled, Wallace wheeled around and pushed Artest in the face. The benches emptied and punches were thrown.

As the players continued shoving each other near center court and coaches tried to restore order, Artest sprawled out on his back on the scorer's table, looking relaxed.

Just when it appeared tempers had died down, Artest was struck by a cup and beverage thrown from the stands. He jumped up, and charged into the stands, throwing punches as he climbed over seats.

Fans were punching back, and Jackson and another teammate joined Artest in the melee.

"I was worried about Stephen Jackson and Artest, as silly as they were acting," Brown said.

Security personnel and ushers tried to break up the fighting. Former Pistons player Rick Mahorn, who was seated courtside as a Detroit radio analyst, tried to stop the brawl in the stands.

"The police investigation is ongoing and that's it," said Pistons spokesman Matt Dobek, who refused to further comment .

Detroit's Rasheed Wallace and Indiana's David Harrison were also in or near the stands. Both were trying to break up the fights.

Later, a man in a Pistons jersey approached Artest on the court, shouting at him. Artest punched him in the face, knocking the man to the floor before leaving the court. Artest was pulled away, and the fan charged back. Indiana's O'Neal stepped in and stepped in and punched another man who joined the scrum.

After the game, Ron Artest told ESPN's Jim Gray that his actions were completely in self-defense.

Quentin Richardson of the Phoenix Suns watched the brawl on television.

"I have never seen a fight like that in a game since I was in high school," he said. "Man, there are going to be some lawsuits. You don't think some of those fans aren't going to want some NBA money?"

Police prevented reporters from crossing the loading dock to get to Indiana's locker room or the area where the Pacers' bus was located.

"I'm just embarrassed for our league and disappointed for our young people to see that," Brown said.

Before the contest was stopped, Artest had quite a game and the Pacers were dominating the defending NBA champions in their first meeting since the Eastern Conference finals.

Artest scored 17 of his 24 points in the first quarter and the Pacers led by 20 in the second. Detroit used a 9-0 outburst early in the fourth quarter to close within 82-77.

The Pacers put the game away when Austin Croshere and Jackson made 3-pointers on consecutive possessions to push their lead to 12 points with 4:31 left.

Despite the lopsided score in the final minute, most of the key players for both teams were still in the game.

The contest drew a capacity crowd of 22,076, but it had thinned toward the end of the game as the Pacers pulled away.

The Pacers' next game is Saturday night at home against Orlando. Detroit hosts Charlotte on Sunday.