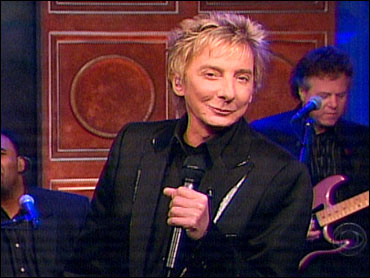 Barry Manilow says plenty of people still like to hear great love songs, so he's keeping things romantic as he moves to the Las Vegas Strip for a new show opening March 5.

"I've always believed that a good love song will never go out of style, no matter how angry the young people get - and they seem to be getting more angry," Manilow said in an interview. "It's reflected in the songwriting of the day and the performing of the day, but I still believe that there are a lot of people who would love to hear a great love song."

The 63-year-old "Mandy" and "Copacabana" crooner starts a two-year run at the Paris Las Vegas hotel-casino next year after spending five years less than 3 miles away at the off-Strip Las Vegas Hilton.

His last performance at the Hilton is Dec. 30, and Manilow says he's already working on concepts for the new production. He says the new show - with tickets going on sale Tuesday - won't look similar to his performances at the Hilton.

"We started from scratch and it's going to be just gorgeous," Manilow said. "All of the equipment and all of the production we had at the Hilton, I didn't want to just move it to the Paris."

Manilow said the venue and new show fit with his latest album of love songs, which debuts Jan. 26. "The Greatest Love Songs of All Time" includes 15 classic love songs, including "Fools Rush In" and "How Deep Is the Ocean."

"I'm actually going to focus on the fact that we are in the most romantic world called Paris," Manilow said. "Since I sing such romantic songs, I thought that would be a really good place to do something like this."

Manilow said he hopes his audiences will receive his new show as well as his Hilton show, which was billed as a collections of his greatest hits. But he says fans will still hear their favorites at his new show.

"They love hearing 'Weekend in New England,' they love hearing 'Mandy,'" Manilow said. "If you throw out a great love song, there's always an audience out there that wants to hear a good one."
By Oskar Garcia