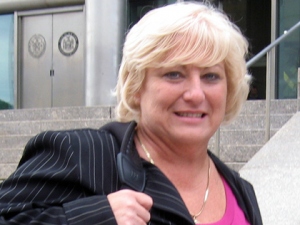 (CBS/WCBS) NEW YORK - A Queens woman accused of killing her ex-cop husband in 2008 by shooting him 11 times was acquitted of murder charges Thursday.

Barbara Sheehan, 50, was found guilty on one charge of criminal possession of a weapon, reports CBS station WCBS. The charge carries a mandatory prison sentence.

According to WCBS, the jury of nine women and three men accepted Sheehan's defense of battered wife syndrome. Sheehan claimed that she feared for her life and acted in self-defense when she shot her husband 11 times while he shaved in the bathroom of their Howard Beach home.

The New York Daily Mail reports that Sheehan said her husband Raymond had threatened to kill her with a 9-mm. Glock semiautomatic pistol he kept on the sink while he shaved.

"She was never able to successfully defend herself against him," attorney Michael Dowd said during the trial's closing arguments, according to WCBS. "The only way she was going to survive, was to act, or she'd be dead."

Sheehan's husband was reportedly depicted by the defense as a bully who abused his wife and terrorized his kids before his shooting death. Sheehan's adult children testified in the trial.

Jennifer Joyce, 25, testified that incidents of violence happened every day at their house, WCBS reports. Raymond Sheehan, 21, testified that he'd considered suicide while living at home and decided to go to school in Connecticut to get out of the tense environment.

During the trial, Sheehan testified that her husband would call her "a stupid, fat and a terrible mother." She also added that he would choke her, knock her down, step on her and spit in her face, reports WCBS.

Prosecutors said Sheehan was not a battered wife and had shot her husband because she was angry over his infidelities and bizarre sexual preferences. They also said that she stood to benefit from his two life insurance policies.

Raymond Sheehan, 49, was a retired sergeant who had worked in the NYPD's crime scene division, the Daily Mail reports.