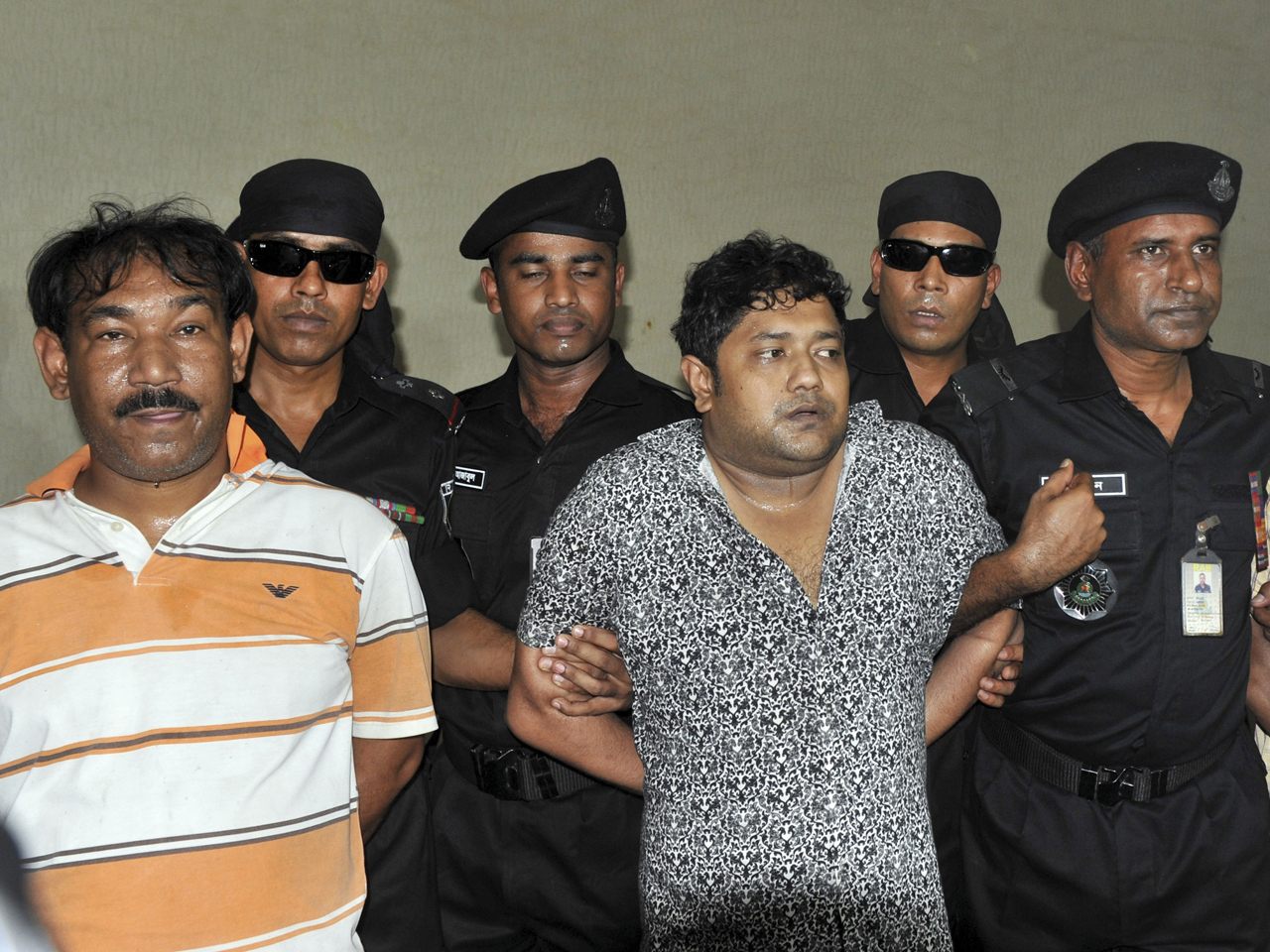 SAVAR, Bangladesh A Bangladesh court on Monday gave police 15 days to interrogate the owner of a building that collapsed last week, killing at least 382 people, as rescuers used heavy machinery to cut through the destroyed structure after giving up hopes of finding any more survivors.

Mohammed Sohel Rana, who was arrested Sunday as he tried to flee to India, will be held for questioning on charges of negligence, illegal construction and forcing workers to join work. His father, Abdul Khaleque, was also arrested on suspicion of aiding Rana to force people to work in a dangerous building.

The illegally constructed, 8-story Rana Plaza collapsed in a heap Wednesday morning as thousands of people worked inside in five garment factories. About 2,500 survivors have been accounted for.

Rana was brought to the Dhaka Metropolitan Magistrate's Court in a bullet-proof vest, and led away to an unknown detention place after the magistrate granted a police request to hold him longer before filing formal charges. The crimes he is accused of carry a maximum punishment of seven years. More charges could be added later.

The collapse was the deadliest disaster to hit Bangladesh's garment industry, which is worth $20 billion annually and supplies global retailers.

In renewed anger against conditions in garment factories — a mainstay of Bangladesh's economy — hundreds of workers poured into the streets in the Dhaka suburb of Ashulia and set fire to an ambulance Monday, the Independent TV network reported. They also tried to set fire to a factory, it said. Authorities shut down all garment factories in the Ashulia and Gazipur industrial suburbs, including one that had reportedly developed cracks and was evacuated earlier.

Volunteers, army personnel and firefighters have worked around the clock since Wednesday, mostly using their hands and light equipment to pull out survivors. Around midnight Sunday, authorities deployed hydraulic cranes and heavy cutting machines to break up the massive slabs of concrete into manageable pieces that could be lifted away.

"We are proceeding cautiously. If there is still a soul alive, we will try to rescue that person," said army spokesman Shahinul Islam.

However, Brig. Gen. Ali Ahmed Khan, chief of the fire brigade at the scene, said there was little hope of finding anyone alive. "Our men went inside and saw some dead bodies in the ground floor. But no one was seen alive," he said.

The civilian volunteers who had swarmed the site since the disaster are now gone, and only workers and army soldiers in green camouflage and hard hats are visible, watching the heavy machinery dig into the thick concrete. Gone also are the waiting ambulances that had rushed the rescued to hospitals over the past five days.

Prime Minister Sheikh Hasina visited the site and a nearby hospital to meet with survivors on Monday, the first time since the disaster.

Hasina earlier ordered the arrest of building owner Rana, a small-time political operative from her Awami League party's youth wing. He was brought back by helicopter from a border town to Dhaka.

He had permission to build a 5-story building but added three more floors illegally. He last appeared in public on Tuesday in front of the Rana Plaza after huge cracks appeared in the building.

Witnesses said Rana assured tenants then that the building was safe. Police, however, ordered an evacuation. A bank and some first-floor shops closed, but managers of the garment factories on the upper floors told workers to continue their shifts.

Hours later, the Rana Plaza was reduced to rubble, crushing most victims under massive blocks of concrete.

Police have also arrested four owners of three factories. Also in detention for questioning are two municipal engineers who were involved in approving the building's design. Local TV stations reported that the Bangladesh High Court has frozen the bank accounts of the owners of all five garment factories.

A garment manufacturers' group said the factories in the building employed 3,122 workers, but it was not clear how many were inside when it fell.

The death toll surpassed a fire five months ago that killed 112 people and brought widespread pledges to improve worker-safety standards. But since then, very little has changed in Bangladesh.

The collapse and previous disasters in garment factories have focused attention on the poor working conditions of workers who toil for as little as $38 a month to produce clothing for top international brands.

Akter said the priority should now shift to helping those who survived the building collapse but were left severely injured. "How can we protect those who lost parts of their bodies, their legs, their hands?" she said. "How will they be able to work again, come back to their workplace?"

Bangladesh's garment industry was the third-largest in the world in 2011, after China and Italy, having grown rapidly in the past decade.