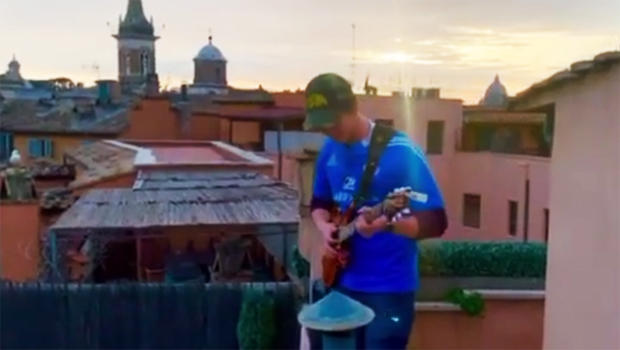 Quarantine has popularized a new kind of performance. When all the world can't be a stage, it seems during lockdown the balcony will have to do, as this platform (and its bigger cousin, the terrace) have become stand-in venues for performances.

"I think we are fairly well-known as 'Those Americans over there on the balcony' now," said cellist Matt Walker. He and violinist Zeneba Bowers spent 20 years in the Nashville Symphony before moving to Italy a few months ago. They'd planned to write their fifth travel book and perform, until Italy's lockdown made that almost impossible.

Correspondent Seth Doane asked, "Did you ever imagine you'd be playing on a balcony?"

"No! We had never thought of using this space as any type of concert venue," said Bowers. "We wanted to use this space as a grill-and-drinking venue."

They bought their place, about an hour from Rome, because of its stunning view of the town of Soriano nel Cimino. "It occurred to us that we could come out here [on the balcony] and play," Bowers said.

When that became just about the only place they could play, they started making nightly videos that feature more view than musicians, and posting them live on Facebook.

Walker and Bowers perform J.S. Bach's "Badinerie," from Orchestral Suite No. 2 in B minor:

Soon, the town started piping these balcony-performances into loudspeakers.

Bowers said, "This is one way we could still perform, that we could do something positive for our community, and also not go crazy in quarantine. Helps!"

Doane asked Liz Lev, a Rome-based art historian, "Is this coronavirus making us more appreciative of the balcony?"

"I think the balcony has really come into its own in this period," Lev replied.

Standing in St. Peter's Square, under the grand loggia (or papal balcony), where the world first meets a new pope, Lev said, "What balcony could be more famous than the center of St. Peter's? It's the most famous balcony – I would argue, I would even say it's more famous than the Queen of England's balcony, but that might get me into trouble."

"We connect balconies with things like the Pope," Doane said. "But there are also bad leaders who've used balconies."

Historically, it's a perch that's said "power."  From balconies, Benito Mussolini and Hitler exhorted their people to war.  But there are also balconies that inspire Shakespearean love, like the balcony of Juliet Capulet in Verona.

According to Lev, there is evidence of balcony design in Persia and Egypt, and in Pompeii, buried by volcanic ash nearly 2,000 years ago, we learned how archaeologists uncovered evidence of the ancient appreciation for the structure – a street with the remains of balconies.

Centuries later, those balconies were all over Europe. Lev said, "And then the next thing you know, you have Sixtus IV, Pope in 1475, taking the King of Naples around to show his fabulous city. And the King of Naples looks at the rickety balconies and says to him, 'You will never have the control of your city if women throwing stuff from the balcony can stop your troops.' So, there went all the balconies."

In today's pandemic crisis, it's a place to burn calories, receive a drive-by blessing, or just kill time.

Father-and-son team Fabio and Jacopo Mastrangelo have made the most of their 8+ weeks in isolation at a breathtaking perch above Rome.

"We are spending a lot of time in making rehearsal to prepare every day a different song," said Fabio. "So, every day it's a premiere."

Jacopo Mastrangelo plays to an empty Piazza Navona, but to a big crowd online. Over the weeks, they've seen neighbors put up flags and pause for their performances. It's community, redefined.

Jacopo Mastrangelo performs "Deborah's Theme" from Ennio Morricone's "Once Upon a Time in America":

"I'm sending a message, a message of hope," said Jacopo.

With the lockdown easing, Matt Walker and Zeneba Bowers will play their last regular balcony performance tonight.  All along, they've carefully selected their mix of Italian and American songs – some especially suited for this time:

Don't know what day it is.
Gotta go to the store.
Stocking up on our vino,
Don't go outside much anymore.

Doane asked, "What's it like to play on the balcony?"

"This is not the romantic answer I was expecting!" Doane said.

Today, the balcony has become a place to cheer front-line workers, connect with neighbors, or toast to a less-complicated time.