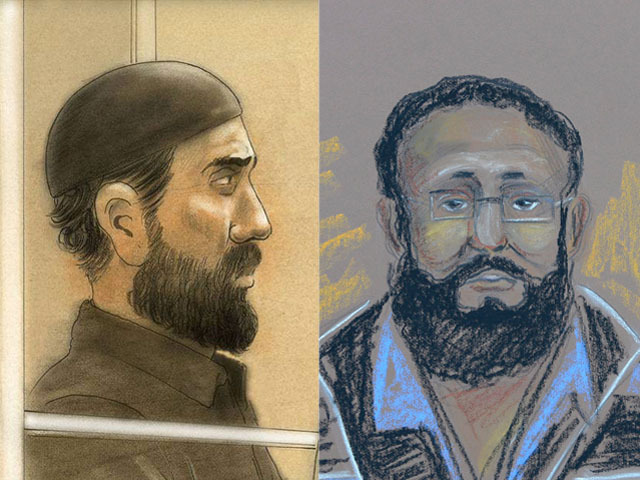 TORONTO A suspect accused of plotting with al Qaeda in Iran to derail a train in Canada said Tuesday authorities were basing their conclusions on mere appearances. Iran, meanwhile, denied any involvement.

Canadian investigators say Raed Jaser, 35, and his suspected accomplice Chiheb Esseghaier, 30, received "directions and guidance" from members of al Qaeda in Iran. Iran said it had nothing to do with the plot, and groups such as al Qaeda do not share Iran's ideology.

Charges against the two men include conspiring to carry out an attack and murder people in association with a terrorist group. Police — tipped off by an imam worried about one of the suspects' behavior — said it was the first known attack planned by al Qaeda in Canada.

In a brief court appearance in Montreal, a bearded Esseghaier declined to be represented by a court-appointed lawyer. He made a brief statement in French in which he called the allegations against him unfair.

"The conclusions were made based on acts and words which are only appearances," he said in a calm voice after asking permission to speak.

Jaser appeared in court earlier Tuesday in Toronto and did not enter a plea. He and was given a new court date of May 23. He had a long beard and wore a black shirt with no tie, and was accompanied by his parents and brother. The court granted a request by his lawyer, John Norris, for a publication ban on future evidence and testimony.

"I don't know nothing. Let the police do their job," his father, Mohammed Jaser, said outside the courtroom in a crush of journalists.

The men's case has raised questions about the extent of Shiite-led Iran's relationship with the predominantly Sunni Arab terrorist network. Relations between the two have been rocky for many years, but some al Qaeda members were allowed to stay in Iran after fleeing Afghanistan following the U.S. led invasion there. Iran watched them carefully and limited their movements.

U.S. intelligence officials track limited al Qaeda activity inside Iran. Remnants of al Qaeda's so-called management council are still there, though they are usually kept under virtual house arrest by the Iranian regime There are also a small number of financiers and facilitators who help move money, and sometimes weapons and people throughout the region from their base in Iran.

Last fall, the Obama administration offered up to $12 million in rewards for information leading to the capture of two al Qaeda leaders based in Iran. The U.S. State Department described them as key facilitators in sending extremists to Iraq and Afghanistan. The U.S. Treasury Department also announced financial penalties against one of the men.

Officials in Canada said Jaser and Esseghaier had "direction and guidance" from al Qaeda members in Iran but no financial assistance, and there was no reason to think the planned attacks were state-sponsored.

Iran's foreign ministry spokesman Ramin Mehmanparast told reporters on Tuesday that groups such as al Qaeda have "no compatibility with Iran in both political and ideological fields."

"We oppose any terrorist and violent action that would jeopardize lives of innocent people," he said.

Mehmanparast called the Canadian claims part of hostile policies against Tehran, and accused Canada of indirectly aiding al Qaeda by joining Western support for Syrian rebels. Some Islamic militant factions, claiming allegiance to al Qaeda, have joined forces seeking to topple the regime of Bashar Assad, one of Iran's main allies in the region.

The two countries have no diplomatic relations after Canada unilaterally closed its embassy in Tehran in 2012 and expelled Iranian diplomats from Ottawa.

Police said the men are not Canadian citizens and had been in Canada a "significant amount of time," but declined to say where they were from or why they were in the country.

Norris, Jaser's lawyer, said his client would "defend himself vigorously" against the accusations, and noted his client was a permanent resident of Canada who has lived there for 20 years. He refused to say where Jaser was from, saying that revealing his nationality in the current climate amounted to demonizing him.

The investigation surrounding the planned attack was part of a cross-border operation involving Canadian law enforcement agencies, the FBI and the U.S. Department of Homeland Security. Canadian police said the men never got close to carrying out the attack.

RCMP chief superintendent Jennifer Strachan said Monday that Jaser and Esseghaier were targeting a route, but did not say whether it was a cross border route.

In New York, NYPD spokesman Paul Browne declined to discuss reports that the plot targeted a passenger line between New York City and Canada. However, Mayor Michael Bloomberg said Tuesday that Canada has kept New York posted on the investigation.

"I can just tell you that you are probably safer in New York City than you are in any other big city," Bloomberg told reporters Tuesday without discussing details.

Police in Canada said Jaser and Esseghaier had been under investigation since last fall.

Muhammad Robert Heft, who runs an outreach organization for Islamic converts, and Hussein Hamdani, a lawyer and longtime advocate in the Muslim community, said one of the suspects is Tunisian and the other is from the United Arab Emirates. Heft and Hamdani were part of a group of Muslim community leaders who were briefed by the RCMP ahead of Monday's announcement.

In Abu Dhabi, a UAE source informed about the attack plot said there was "no UAE citizen" with the name Raed Jaser. The source spoke on condition of anonymity because he was not authorized to brief media.

Authorities were tipped off by members of the Muslim community, Best said.

The Canadian Council on American-Islamic Relations, a national Muslim civil liberties organization, planned to hold a news conference in Toronto on Tuesday to comment on the arrests.

A spokeswoman for the University of Sherbrooke near Montreal said Esseghaier studied there in 2008-2009. More recently, he has been doing doctoral research at the National Institute of Scientific Research, a spokeswoman at the training university confirmed.

Julie Martineau, a spokeswoman at the research institute, said Esseghaier began working at the center just outside Montreal in 2010 and was pursuing a Ph.D. in nanotechnology.

A LinkedIn page showing a man with Esseghaier's name and academic background said he helped author a number of biology research papers, including on HIV and cancer detection. The page says he was a student in Tunisia before moving to Canada in the summer of 2008.

The page carries a photo of a black flag inscribed with the Muslim declaration of faith: "There is no god but God and Muhammad is his prophet." The same flag was used by al Qaeda in Iraq and then started being used by ultraconservative Islamic groups in Egypt, Tunisia, Mali and elsewhere across the region.

In Markham, Ontario, north of Toronto, police tape cordoned off half of a duplex, with officers remaining at the scene well into Monday night. Sanjay Chaudhary, who lives in the other half of the duplex with his family, said the RCMP questioned him about his neighbor Jaser, asking whether he knew him or spoke to him often.