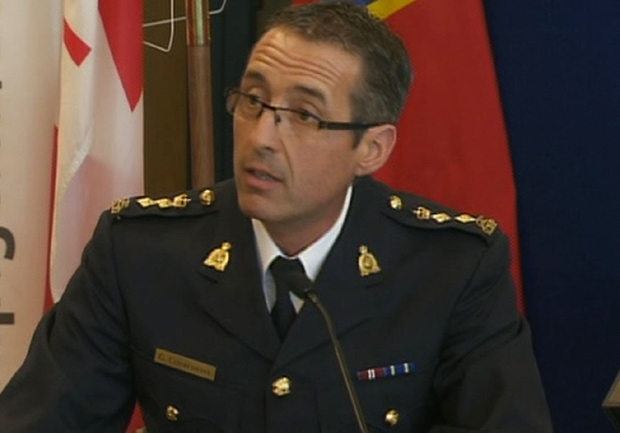 TORONTO Two men were arrested and charged with plotting a terrorist attack against a Canadian passenger train with support from al Qaeda, police said Monday. The case bolstered allegations by some governments and experts of a relationship of convenience between Shiite-led Iran and the predominantly Sunni Arab terrorist network.

The Royal Canadian Mounted Police said Monday that Chiheb Esseghaier, 30, and Raed Jaser, 35, who live in Montreal and Toronto areas, were conspiring to carry out an attack against Via Rail, but posed no immediate threat.

"This is the first known al-Qaida planned attack that we've experienced in Canada," Superintendent Doug Best told a news conference.

Charges against the two men include conspiring to carry out an attack and murder people in association with a terrorist group. Police said the men are not Canadian citizens, but declined to say where they were from. Police said the men had "direction and guidance" from members of al Qaeda in Iran.

The investigation was part of a cross-border operation involving Canadian law enforcement agencies, the FBI and the U.S. Department of Homeland Security.

"It was definitely in the planning stage but not imminent," RCMP chief superintendent Jennifer Strachan said. "We are alleging that these two individuals took steps and conducted activities to initiate a terrorist attack. They watched trains and railways."

Strachan said they were targeting a route, but didn't say if it was a cross border route.

The arrests in Montreal and Toronto raised questions about Iran's murky relationship with the terrorist network. Bruce Riedel, a CIA veteran who is now a Brookings Institution senior fellow, said al-Qaida has had a clandestine presence in Iran since at least 2001 and that neither the terror group nor Tehran speak openly about it.

"The Iranian regime kept some of these elements under house arrest," he said in an email to The Associated Press. "Some probably operate covertly. AQ members often transit Iran traveling between hideouts in Pakistan and Iraq."

U.S. intelligence officials have long tracked limited al Qaeda activity inside Iran. Remnants of al Qaeda's so-called management council are still there, though they are usually kept under virtual house arrest by an Iranian regime suspicious of the Sunni-/Salafi-based militant movement. There are also a small number of financiers and facilitators who help move money, and sometimes weapons and people throughout the region from their base in Iran.

Last fall, the Obama administration offered up to $12 million in rewards for information leading to the capture of two al Qaeda leaders based in Iran. The U.S. State Department described them as key facilitators in sending extremists to Iraq and Afghanistan. The U.S. Treasury Department also announced financial penalties against one of the men.

Alireza Miryousefi, spokesman for the Iranian mission to the United Nations, said the terrorist network was not operating in Iran.

"Iran's position against this group is very clear and well known. (Al Qaeda) has no possibility to do any activity inside Iran or conduct any operation abroad from Iran's territory," Miryousefi said in a statement emailed to the AP late Monday. "We reject strongly and categorically any connection to this story."

There is no connection between the Canadian terrorist plot and the Boston Marathon bombings, said a U.S. Justice Department official in Washington, speaking on condition of anonymity because the source was not permitted to speak on the record about the matter.

A spokeswoman for the University of Sherbrooke in Montreal said that Esseghaier studied there in 2008-2009. More recently, he has been doing doctoral research at the Institut national de la recherche scientifique, a sokeswoman at the training university confirmed. A Linked In page says a man with Esseghaier's name and academic background helped author a number of biology research papers, including on HIV and cancer detection. The page carries a photo of a black flag inscribed with the Islamic declaration of faith.

They had been in Canada "a significant amount of time." He would not say how long, but said they had been under investigation since last fall.