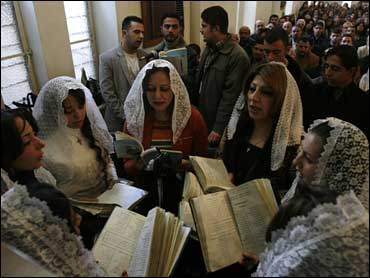 Thousands of Iraqi Christians picked their way through checkpoints and along dusty streets lined with concrete blast walls, crowding into churches in Baghdad on Tuesday for Christmas Mass.

Death is never far in Iraq -- two separate suicide attacks, including one apparently targeting workers in a northern oil hub, killed at least 34 people on Tuesday, shattering more than a week of relative calm, local and U.S. military authorities said.

Local officials said a bomber wearing an explosives vest targeted a funeral procession for two members of an Awakening Council group - fighters who have turned against al Qaeda in Iraq - who were accidentally killed by U.S. troops during a dawn raid.

In Beiji, the bomber detonated his explosives-rigged pickup truck when Iraqi police and members of the volunteer security force prevented him from entering the gate of a compound belonging to the state-run North Oil Company, a police officer said.

Beiji's police chief was fired, said Maj. Gen. Abdul-Karim Khalaf, a spokesman for the Interior Ministry. Authorities imposed a curfew on the city, about 155 miles north of Baghdad, until further notice.

Iraq's oil industry and those who work in it have come under repeated attack since the U.S.-led 2003 invasion, usually through bombings of key pipelines. Revenue from the oil industry is seen as key to funding Iraq's reconstruction and sparking economic recovery.

But the number of attacks in Iraq in general has fallen dramatically in the past few months - the U.S. military says by 60 percent since June - and the country's small Christian community took advantage of the lower violence to turn out in numbers unthinkable a year ago.

"We did not celebrate last year, but this year we have security and we feel better," said Rasha Ghaban, one of many women at the small Church of the Holy Family in Karradah, a mainly Shiite district in downtown Baghdad where many Christians live. "We hope our future will be better, God willing."

Families streamed into the church's courtyard, wrapped in heavy winter jackets to protect them from the early morning chill. Young children with neatly combed hair held their parents' hand, and women stopped by the front door to pick through a basket of small lacy headscarves, placing them over their hair before walking in.

The pews were almost full - women toward the back and on the right side of the church, the men on the left - and still more people streamed in. Outside, police armed with automatic rifles manned a checkpoint at the corner of the narrow street, searching every passing car for possible bombs.

Christians have often been the target of attacks by Islamic extremists in Iraq, forcing tens of thousands to flee. Many of those who stayed were isolated in neighborhoods protected by barricades and checkpoints. Less than three percent of Iraq's 26 million people are Christians - the majority of whom are Chaldean-Assyrians and Armenians, with small numbers of Roman Catholics.

A coordinated bombing campaign in 2004 targeted churches in the Iraqi capital, and anti-Christian violence also flared last September after Pope Benedict XVI made comments perceived to be against Islam.

But this year, with the Muslim holiday of Eid al-Adha coming just before Christmas, Iraq has been living through some of the most peaceful moments since the U.S.-led invasion of 2003.

Cardinal Emmanuel III Delly, leader of the ancient Chaldean Catholic Church and Iraq's first cardinal, celebrated Mass before about 2,000 people in the Mar Eliya Church the eastern New Baghdad neighborhood of the capital.

"Iraq is a bouquet of flowers of different colors, each color represents a religion or ethnicity but all of them have the same scent," the 80-year-old Delly told the congregation. "I'd like here to congratulate Muslims before Christians in their Eid and I wish peace and prosperity to all Iraqis in their country."

Muslim clerics - both Sunni and Shiite - also attended the service in a sign of unity.

"May Iraq be safe every year, and may our Christian brothers be safe every year," Shiite cleric Hadi al-Jazail told AP Television News outside the church. "We came to celebrate with them and to reassure them. ... This national gathering is beautiful against the sectarian fighting, and God willing from this lesson we'll all pray for peace."

"We didn't celebrate like this in the past two years as we were holding limited celebrations for relatives in an atmosphere filled with fear," said Jalal, a cook in one of Baghdad's social clubs. "Now we feel better as we see all these security forces in the streets to protect us."

Delly, speaking to The Associated Press at his guarded compound in western Baghdad on Christmas Eve, said fear still pervaded everyday life, despite the fall in violence.

"Everyone is still afraid to go out," he said. "Because of the car bombs, etc., and other things. Even small animals are afraid of the danger."

Bombers still attack city markets, police or army patrols and stores, and the dead bodies of tortured kidnap victims turn up almost daily along river banks or dumped on the streets.

Venturing out in large numbers late at night in Baghdad is still unthinkable, so the capital's Christians celebrated midnight Mass in the middle of the afternoon on Christmas Eve.

But in Irbil, a city in northern Iraq's much safer Kurdish autonomous region, thousands packed the Mar Yusef church at night, with people overflowing outside into the freezing mountain air.