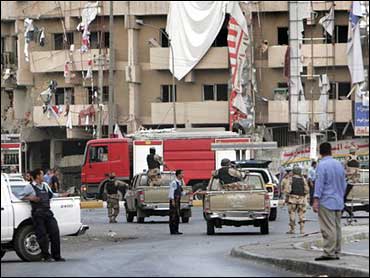 The first blast occurred shortly after sunrise at a security checkpoint near the Sadeer Hotel in central Baghdad, officials said. The Iraqi Defense Ministry said 12 people, not including the bomber, were killed and 18 were injured, including security guards and civilians.

About three hours later, a second suicide bomber targeted a former Saddam Hussein palace being used by the Ministry of Interior police command. Two commandoes were killed and 10 people were injured, police said.

Maj. Gen. Adnan Thabit told Al-Jazeera television that commandoes opened fire on the vehicle detonating it about 50 yards from the palace.

The Sadeer Hotel attack shook the heart of the capital and sent a huge plume of black smoke rising over the 14th of Ramadan Mosque along the traffic circle where the statue of Saddam was hauled down by Iraqis and U.S. Marines on April 9, 2003.

The injured include people in nearby shops and cafes which were damaged by the blast.

Alaa Issa, who works as a guard at the Sadeer, said from his hospital bed that "I don't remember anything but waking up in the hospital."

Mohammed Badr, who works at a nearby restaurant, said he first felt the concussion wave from the blast, "then I heard the explosion."

"Part of the ceiling fell on me," he said at the hospital.

In March, Abu Musab al-Zarqawi's Al Qaeda in Iraq purportedly posted a video on a Web site showing the huge explosion at the Sadeer Hotel, killing four and wounding 40 others, including 30 American contractors.

Al-Zarqawi's group described the Sadeer as the "hotel of the Jew."

Six of 12 Sunnis joined the committee meeting that began behind closed doors Monday morning, said Baqir Hammoudi, secretary to Humam Hammoudi, the head of the committee.

The Sunnis had suspended participation in the committee to protest last Tuesday's assassination of two Sunnis involved in drafting the charter, which must be approved by parliament Aug. 15 and submitted to the voters in an October referendum.

Sunni Arab participation in the drafting is considered essential in order to win approval for the charter among the country's influential minority, which forms the core of the anti-U.S. insurgency.

The Sunni decision to return to the committee had been expected. Sunni committee member Saleh al-Mutlaq told The Associated Press he and his colleagues had received verbal assurances that their grievances would be addressed.

They were to have met with the committee leadership for breakfast Monday to finalize their decision to return.

It was not clear whether all their demands had been accepted.