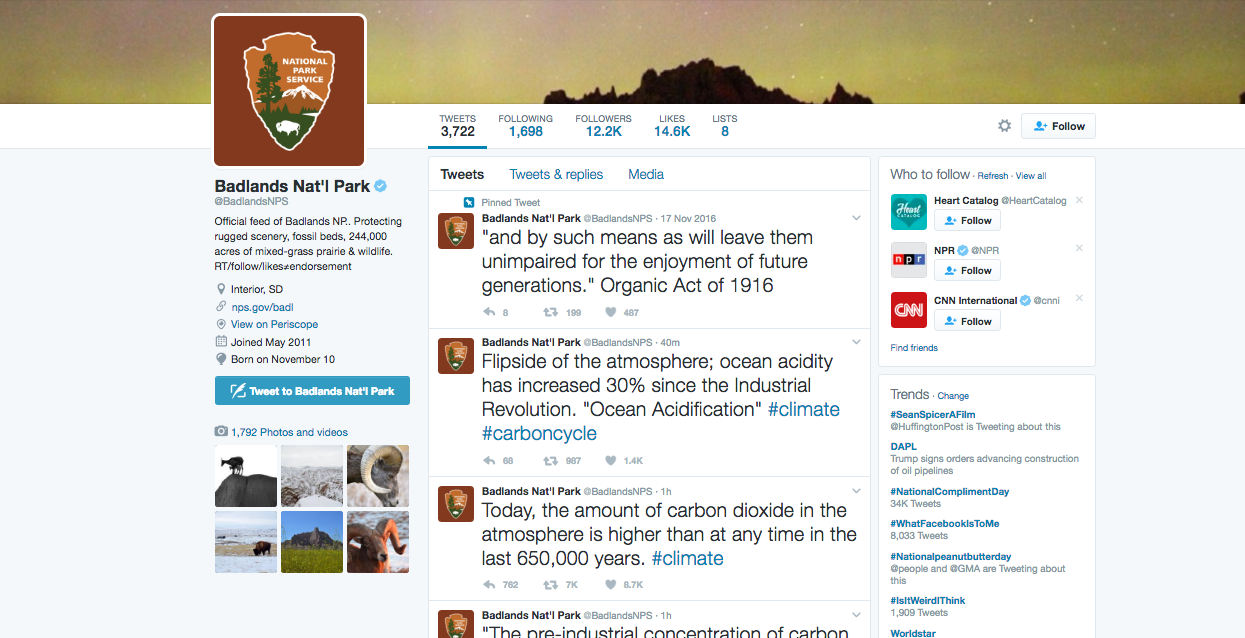 Just days after The National Park Service (NPS) was forced to shut down its Twitter activity over two retweets the Department of the Interior deemed inconsistent with the agency’s mission, the Twitter account for Badlands National Park in South Dakota seems to have gone rogue, tweeting numerous scientific facts about climate change that have since been deleted.

The first tweet about climate science came at 11:40 a.m. local time Tuesday. It said: “The pre-industrial concentration of carbon dioxide in the atmosphere was 280 parts per million (ppm). As of December 2016, 404.93 ppm.”

Just moments later, the same account tweeted, “Today, the amount of carbon dioxide in the atmosphere is higher than at any time in the last 650,000 years” — with the hashtag “#climate” added for good measure.

Then, at 12:25 p.m., the next tweet said: “Flipside of the atmosphere; ocean acidity has increased 30% since the Industrial Revolution. ‘Ocean Acidification’ #climate #carboncycle”

Claudia Koerner, a reporter for BuzzFeed News, said the National Park Service told her the tweets came from a former employee and the account had been “compromised.”

The messages were short-lived. As of 5:35 p.m., all the tweets posted in images above were deleted. In response to that action, Democratic National Committee press secretary Adrienne Watson released the following statement: “Vladimir Putin would be proud.”

This comes as the Trump administration has instituted a temporary media blackout at the Environmental Protection Agency, causing the EPA’s social media accounts to fall silent after Friday’s Inauguration Day.

The EPA’s final tweet before the social media blackout simply reads, “@GinaEPA shares a report about actions taken by the agency under the Clean Air Act during the last eight years,” with a link to a blog post by now-former Obama EPA Administrator Gina McCarthy.

While the main National Parks Service Twitter account is now back up and tweeting, its posts since the temporary halt at that agency have remained largely innocuous: benign tweets about new research libraries, sled dogs in Denali and the motivational power of the mountains. Those posts seem certain not to rub the Trump administration the wrong way. Badlands’ posts on the carbon cycle and climate change, however, seem to have proven otherwise.

President Trump has, in the past, tweeted that he believes climate change is a hoax perpetrated by China. During their confirmation hearings, however, several of Trump’s Cabinet nominees disagreed with that notion, including ExxonMobil chief executive Rex Tillerson and Oklahoma Attorney General Scott Pruitt, Trump’s choice to take over the EPA.

On Monday, White House Press Secretary Sean Spicer answered a question from the Huffington Post’s Jennifer Bendery on climate change — specifically, about the fact that 2016 was the hottest year on record and how President Trump plans to deal with that fact  — by saying, “He’s going to meet with his team and figure out what policies are best for the environment. One of the things he talked about during the campaign is there’s a balance, and he’s trying to make sure we use our resources appropriately, that we maximize things to make sure that we don’t do so at the detriment of economic growth and job creation.”