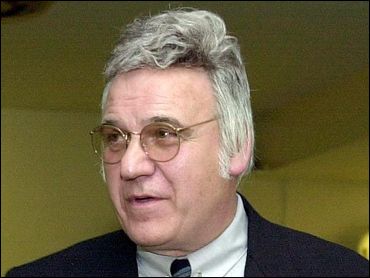 Ex-congressman James A. Traficant Jr.'s famous mop-top is a rug.

Some people thought the hair was too unruly to be a toupee. But Sheriff Drew Alexander said the newly sentenced Traficant had to remove the hairpiece this week during a routine search while being booked into the Summit County Jail.

Traficant, 61, was sentenced Tuesday to eight years in federal prison for corruption. He was immediately led off to jail in handcuffs after the judge refused to let him remain free on bail while he appeals his conviction.

The former representative from Youngstown, who was expelled by the House last week, is being held temporarily in the jail while awaiting assignment to a federal prison.

Alexander said Traficant was allowed to keep the toupee in his cell and jail personnel didn't require him to remove it for his booking photo.

But federal prisoners aren't allowed to wear toupees, so Traficant must give it up when he's sent to federal prison soon, said Bureau of Prisons spokeswoman Traci Billingsley.