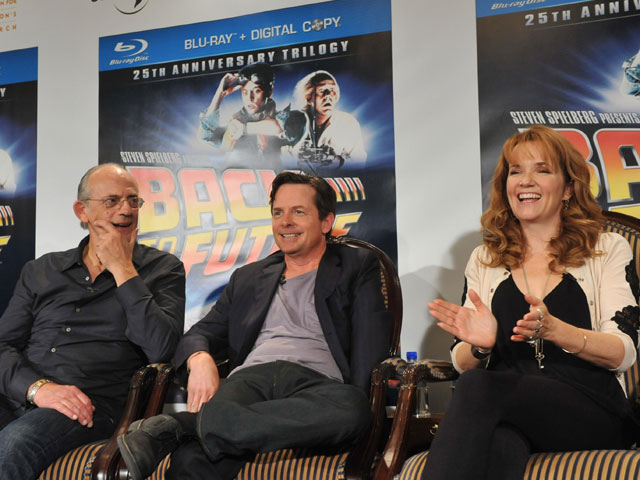 NEW YORK (CBS) Great Scott! It's been 25 years since Marty McFly hopped into that DeLorean and traveled back in time in the original "Back to the Future."

Thompson told reporters that she still has her pink dress from the "Enchantment Under the Sea" dance. "Every Halloween my kids try it on," she said, pointing out her two daughters in the audience.

"What I wish I had was that freakin' guitar!" Fox said, adding that he believes he saved some of his sneakers from the film. "I think I'm still tired from the movie. Does that count as a souvenir?"

Lloyd mentioned a "yellow shirt with trains on it," that he held onto, while Steenburgen kept a pin with her character's name, Clara.

Another hot topic was the futuristic technologies imagined for the films.

"People ask me all the time, 'Where can I get a hoverboard?'" Fox said. "I have no answers for you."

He also talked about how it was "a blessing" to be part of a film that "just made people happy," and had a very direct answer when asked how being in the film changed his life.

"Did it change my life?" he repeated. "It made me really famous."

He also touched on the global popularity of the film, saying, "I love being in Bhutan and someone's going 'McFly!'"

Thompson also recalled her favorite memory from the making of the films - her screen test. "They put some kind of wig and a thing on me, to see if I could play old," she said, adding that it was the most fun she'd ever had during an audition. Steenburgen also shared a favorite memory from her time making "Back to the Future 3" - her love scene with Lloyd, which she said was "very romantic."

When asked what their characters would be doing 25 years later, Fox said that he thought Marty would have kids and be a family man, while Lloyd assured reporters that Doc Brown would still be inventing things, and Steenburgen added that Clara and Doc would still be married. Thompson was unsure, noting that the films showcased different outcomes for Lorraine McFly's life.

But while the series remains beloved by fans around the world - it's being re-released on Blu-ray and DVD on Tuesday to mark the anniversary - the filmmakers say there are no plans for any sequels or reboots of the franchise.

"We love 'Back to the Future' the way it is," Gale said. "We don't wanna screw around with the space-time continuum."