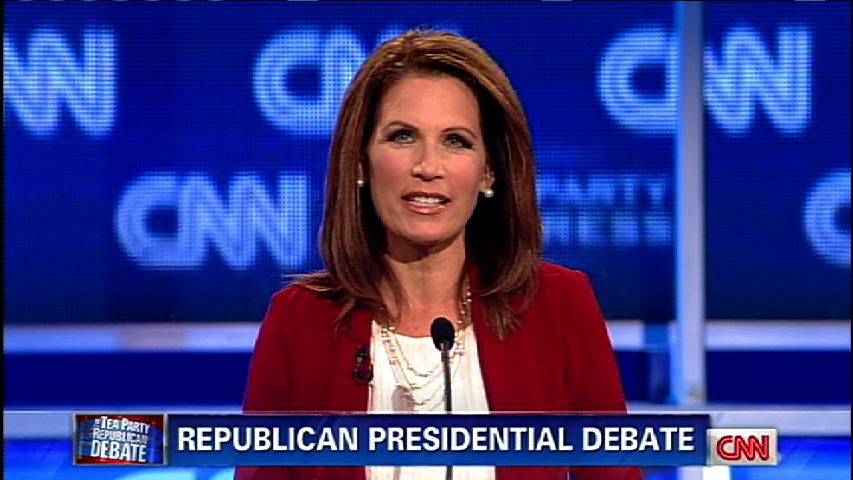 Republican presidential candidate Michele Bachmann on Monday blasted Texas Gov. Rick Perry's 2007 decision to issue an executive order mandating HPV vaccines for schoolgirls, arguing that the policy amounted to a "government injection" and was a "violation of a liberty interest."

"I'm a mom. And I'm a mom of three children. And to have innocent little 12-year-old girls be forced to have a government injection through an executive order is just flat out wrong," Bachmann said during Monday night's Republican presidential debate in Tampa, Florida. "That should never be done. It's a violation of a liberty interest."

(Bachmann presumably meant to say she had three daughters; she actually has five biological children, three of whom are female.)

In 2007, Perry issued an executive order making Texas the first state to require schoolgirls to get vaccinated against HPV, a sexually transmitted virus that causes cervical cancer. The executive order faced fierce opposition from conservatives, and the Texas state legislature voted to overturn it.

Perry said on Monday it was a mistake to sign the executive order rather than taking the matter to Congress, but emphasized that "at the end of the day, I am always going to err on the side of life."

"Indeed, if I had it to do over again, I would have done it differently," Perry says, of the 2007 decision. "I would have gone to the legislature, worked with them. But what was driving me was, obviously, making a difference about young people's lives."

"Little girls who have a negative reaction to this potentially dangerous drug don't get a mulligan. They don't get a do- over. The parents don't get a do-over. That's why I fought so hard in Washington, D.C., against President Obama and Obamacare," she said.

Bachmann also suggested that Perry's decision was influenced by a $5,000 political contribution to the Texas governor's campaign.

"I just wanted to add that we cannot forget that in the midst of this executive order there is a big drug company that made millions of dollars because of this mandate. We can't deny that," Bachmann said.

"What are you suggesting?" asked the debate's moderator, Wolf Blitzer.

Perry said he was "offended" by the suggestion that he could be bought for $5,000.

In an interview with CNN after the debate, Bachmann argued that Perry's admission that he could have done things differently didn't change the situation.