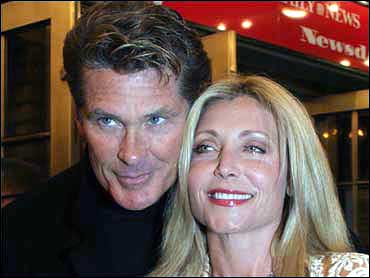 David Hasselhoff's former wife, Pamela Bach, has pleaded not guilty to a misdemeanor hit-and-run charge stemming from a fender-bender in North Hollywood.

Bach, 43, entered the plea on Wednesday.

Her attorney Peter Knecht said a "civil compromise" was being worked out, and he expected the charge to be dismissed.

"She had a minor fender-bender," Knecht said, adding that no alcohol or drugs were involved.

He said Bach backed into a car Jan. 22, and after inspecting both cars, left when she didn't see any damage. An onlooker took down her license plate number.

The actress, who has appeared in the soap opera "The Young and The Restless," is charged under the name Pamela Hasselhoff, but she's publicly known as Pamela Bach.

She and her ex-husband, who starred on "Knight Rider" and "Baywatch," have been locked in a bitter custody battle involving the couple's two teenage daughters.

They were married in December 1989 and divorced last year.