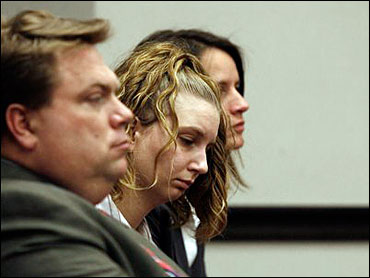 When 2-year-old Riley Ann Sawyers' badly decomposed remains were found inside a plastic box in October 2007, investigators promised they would do at least one thing for the toddler.

"That we would find the people responsible for her death and bring them to justice and we did," said Galveston County Sheriff's Sgt. Michael Barry.

A jury on Monday convicted Riley's mother, Kimberly Dawn Trenor, of capital murder for the little girl's death. The child had been whipped with belts and flung across a room like a rag doll before her body was dumped in Galveston Bay. Until her remains were identified, she was dubbed "Baby Grace" by investigators.

Jurors deliberated less than two hours before reaching a verdict. The conviction brought an automatic sentence of life in prison without parole.

Prosecutors declined to seek the death penalty against either Trenor or her husband because they didn't think they could prove that the pair would be a future danger, a requirement for such a punishment.

"All of us involved in this case from the beginning have been waiting for this day for some time," Galveston County District Attorney Kurt Sistrunk said after the verdict.

Trenor and her husband, Royce Clyde Zeigler II, were accused of killing the toddler in July 2007. Prosecutors said Trenor and Zeigler beat Riley with belts, dunked her head in cold bath water and threw her onto a tile floor, fracturing her skull and causing her death. Zeigler, also charged with capital murder, is being tried later and remains jailed.

After Riley's death, the couple stuffed her body in a plastic box and hid it in a storage shed at their suburban Houston home before dumping it in the bay, according to authorities. It took weeks for investigators to identify her remains.

Many of those investigators cried after hearing the verdict read in the courtroom.

Trenor's defense attorney, Tommie Stickler Jr., had implored jurors during his closing arguments on Monday to not let emotion control their decision.

"I'm not going to say the jury did or didn't put away their emotions," he said. "I don't think anybody could have put them aside."

The jury foreman, Randall Rothschild, said emotion did not play a role in the verdict. "Justice is served," he said.

Riley's identity was a mystery for weeks until her paternal grandmother in Ohio, Sheryl Sawyers, saw an artist's sketch of the girl and told authorities in Texas she thought it was her granddaughter.

"For Sheryl it's difficult. She looked at Kimberly as a daughter," said Laura DePledge, an attorney for the Sawyers family. "It's a victory for Riley but it's another loss for Sheryl and the Trenor family."

Sheryl Sawyers as well as Trenor's parents were in the courtroom when the verdict was read but did not speak with reporters afterward.

During closing arguments Monday, prosecutors called Trenor a cold-blooded liar who ignored her daughter's pleas to stop the abuse.

Trenor admitted disciplining the child but blamed 25-year-old Zeigler for throwing Riley across the family room and causing the skull fractures.

Stickler said Trenor never intended to kill her daughter and painted a picture of a frightened 18-year-old at the time of Riley's death who was being controlled by her husband.