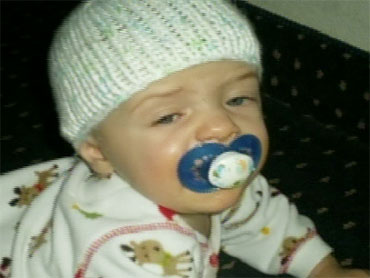 Eight-month-old Gabriel Johnson has not been seen in nearly a year. And in an audio tape obtained exclusively by the CBS affiliate KPHO in Phoenix, a voice purported to be that of his mother, Elizabeth Johnson, claims she killed her only son.

Baby Gabriel was last seen the day after Christmas.

On "The Early Show" Wednesday, CBS News correspondent Bill Whitaker reported police still don't know whether he is alive or dead. But his 24-year-old mother, Elizabeth Johnson, has apparently claimed in a phone conversation with the baby's father that she killed their son.

In a recording, Gabriel's father Logan McQueary says, "Where are you and where is Gabriel?"

A voice attributed to Elizabeth Johnson can be heard saying, "Gabriel is in a dumpster."

Johnson responds, "You want to talk to girls, that's the price you pay."

Johnson and her ex-boyfriend, Logan McQueary shared joint custody. But the day he was supposed to get Gabriel, he received a text message from Johnson that the baby was dead. In the audio recording obtained by CBS station KPHO, Johnson seems to confess to murder -- in chilling detail.

Johnson says, "You made me do this."

"You did not hurt Gabriel," McQueary answers.

According to KPHO, the source of the recording has requested to remain anonymous.

Johnson was on the run at the time of the alleged call and had changed her identity as police searched nationwide for both mother and son. Her motive? She believed McQueary was flirting with other women online and wanted revenge.

In the taped conversation, Johnson continues, saying, "Don't you care about me? All you care about is Gabriel. And he's gone now...You know what I'm capable of, and you pushed me anyway...You destroyed my life."

McQueary says, "I haven't destroyed anything."

Johnson replies, "Yes, you have Logan, you made me kill my baby boy. ... So find some new girl to make your new baby."

Days later, Johnson was arrested in Florida, and told police she gave the baby to strangers in Texas. She had also promised an Arizona couple, Jack and Tammi Smith they could adopt the baby. Johnson remains behind bars, charged with kidnapping, child abuse and custodial interference. She is due back in court January 24.

On "The Early Show," Beth Karas, correspondent for tru-TV Network's "In Session," said of the tape's contents, "This is not new information but new to us, the public following the case, and it is really interesting to listen to the exchange and the details that she gives him about what she did. I mean, she doesn't hesitate in saying I smothered him, he turned blue, I put him in a diaper bag, he's in a trash can. Very quickly it comes out of her mouth. Is it a lie or the truth, who knows?"

"Early Show" co-anchor Harry Smith remarked, "Because she's clearly trying to communicate and get to him in some way shape or form and that becomes the question. Is she just trying to get to this guy or is what is coming out of her mouth the truth?"

Karas said, "She clearly wants to hurt the father of the baby. Her former boyfriend who had broken up with her, all right. She later recants that this was a killing and says she gave the baby away. Either way, she didn't have authority to do. This I mean, she wants to hurt him and now the authorities have to decide, you know, is the baby alive? They think he might be."

Smith said, "Did she not also confess at some point during some interrogation, may or may not have been admissible?"

Karas said, "We don't know the details of it but there is a motion right now to dismiss the Arizona case because of the Texas investigation. You see, she was in San Antonio, there's a separate homicide/disappearance investigation there and a Texas detective, kind of got into the jail in Arizona and talked to her for three hours on tape some months ago. Her new lawyers want to dismiss the case because of that saying that's a violation. ... Her lawyers didn't know about it. However, the Arizona case isn't based on that. I suspect that won't fly."

As for Jack and Tammi Smith, who reportedly were told by Elizabeth Johnson that she was going to give the baby up to them for adoption, Karas said that element of the case is "the new defense."

Karas explained, "Tammi Smith is facing conspiracy to interfere with the custody of the father because she actually had the baby for a few weeks before the custody decision was made. And that custody decision was made a few days before the disappearance of the baby. Tammi Smith now says, 'I want a new grand jury presentation. My defense is I was going to adopt her, the mother, and there's not that much of an age difference, 12 years or so, and that way get the baby, and that's not criminal.' So she says she should not be held. That's her defense."