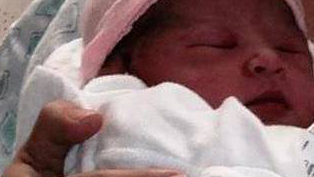 VIENNA, Va. -- A set of parents-to-be had to pull their SUV onto the side of the road in Northern Virginia and deliver their baby girl inside the vehicle on one of the coldest days in decades,  CBS DC reported.

Fairfax County police say the dispatch center got the frantic call shortly after 6 a.m. Tuesday. Due to a language barrier, it took a few minutes to determine that it was a medical call for a woman giving birth in a car.

When the first officer arrived on the scene, near the intersection of Nutley Street and Virginia Center Boulevard in Vienna, things appeared calm, according to department spokeswoman Lucy Caldwell.

When the officer went to check on the couple, he gave the "OK" sign with his hands to the woman in the back seat. She returned the gesture, smiled and pulled down a blanket to reveal her brand-new baby girl, Caldwell said.

Shortly afterwards, fire and rescue arrived on the scene and transported the family to Inova Fairfax Hospital.

The temperature at 7 a.m. Tuesday in Vienna was around 9 degrees.