Ken Lewis, the embattled CEO of Bank of America has always been full of surprises. It sure took my breath away when Lewis Countrywide Mortgage on the eve of the biggest mortgage meltdown in US history, not to mention his shot gun $50 billion Merrill Lynch, after conducting what seemed to be five minutes of due diligence. 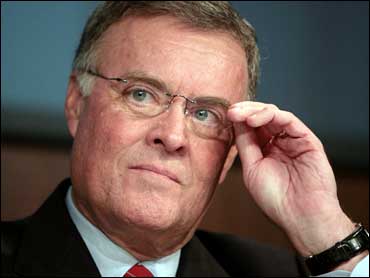 (AP Photo/Bebeto Matthews)
The guy likes to spring news on the market, which is why Ken Lewis' resignation from Bank of Americashouldn't have been all that surprising. But it was and here's why: Ken Lewis had essentially gotten everything he had ever wished for. He had finally cobbled together enough companies to vault him into the big leagues of banking. The man who started at Nations Bank had built a global financial conglomerate that demanded respect even from those Wall Street execs that Lewis supposedly despised.

But the regulators have turned up the heat on Lewis. In addition to NY governor in-waiting Andrew Cuomo, Judge Jed Rakoff forced the SEC to scrap its $33 million settlement and go to court with B of A. With the pressure mounting, Lewis found his inner John Denver and invoked the "Rocky Mountain High" defense and called it quits. (The WSJ reported that Lewis made his decision to step down while vacationing in Aspen, CO.)

Now the race is on for a successor - I'm rooting for Brian Moynihan for purely selfish reasons - I had lunch with him once and therefore have fooled myself into thinking that he would grant me an interview. Maybe Lewis shouldn't have pushed out John Thain and his fancy officeafter all!

I've said in the past that Ken Lewis was a weeniefor acting like he was "shocked" that Merrill Lynch was saddled with so much toxic crap or that he didn't know about the $3.6 million in bonuses paid to Merrill employees days before the deal closed. But there was a whiff of a Greek tragedy in the air last night when I heard the news. Beware what you wish for...