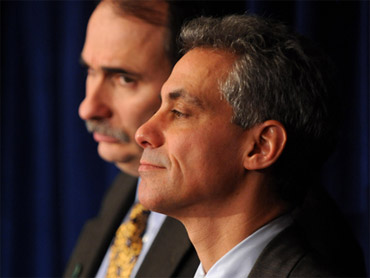 Axelrod is expected to reassume his role as campaign manager in Mr. Obama's 2012 reelection bid. A potential, if not likely, replacement for Axelrod is current White House Press Secretary Robert Gibbs.

The dominoes don't stop there. Rahm Emanuel, the president's Chief of Staff, may leave the White House as soon as next month.

Emanuel has told colleagues that he's very likely to run for mayor of Chicago, and that could see him depart the White House in October.

"I'm not going to rule anything in or out. He's in the process of thinking through what's best for Rahm," Gibbs told reporters Wednesday on Air Force One.

The staff shake up comes as the president is set to address the United Nations General Assembly on Thursday, attempting to reaffirm America's position as a global leader.

Mr. Obama will urge world leaders Thursday to back an agreement to establish an independent Palestinian state, and stress his administration's efforts to slow the spread of nuclear weapons and boost the world economy.

At the U.N. development summit, Mr. Obama said Wednesday that the U.S. would focus its aid on lifting developing nations out of poverty.

"Let me be clear, the United States of America has been, and will remain, the global leader in providing assistance. We will not abandon those who depend on us for life saving help," the president told the gathering.