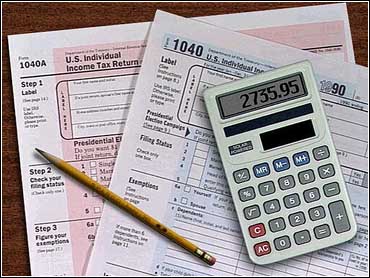 It's not too early to start thinking about doing your taxes.The Saturday Early Show's personal finance adviser, Ray Martin, explains why now is the time to avoid potential tax pitfalls, and why April or even January is too late.

With only two weeks left until year-end, the time remaining to make some money-saving tax moves is getting short.

Don't think for a minute that because you received a tax refund last year or owed only a small amount, that year-end financial maneuvers are not for you. More people will owe more taxes and penalties than ever before. This could be avoided if they take advantage of some financial moves before year-end.

Here are a few of the tax traps that could snare you:

Pretax Cutbacks: Many employers are informing their "highly compensated" participants of 401(k) and flexible spending plans that, due to regulations requiring broad use of these plans by all employees, the pre-tax contributions of certain groups of workers must be reduced or cut back. In some cases, several thousand dollars must be returned and included in these individuals' taxable income. The common definition of "highly compensated employees" in these regulations is an annual income of $80,000 or more.

Taxable Gains Distributions: More mutual funds are distributing larger gains and doing so earlier this year. That's because fund managers sold more stocks in this volatile market than they bought in prior years. With the number of mutual fund investors doubling from what it was eight years ago, more investors will get snagged by this.

Received Non-Wage Income in 2000: If you received a bonus, exercised stock options, vested in restricted stock or were paid income as a contractor, chances are very high that you'll end up a tax casualty. That's because income taxes are withheld on non-wage income at 28 percent or in some cases not at all. If your tax bracket is higher (31 percent, 36 percent or 39.6 percent) than what is withheld, you may be in an underpaid situation.

Recently Married: Newlyweds who have dual income that is roughly the same stand to get walloped. One reason is that as singles, $52,500 of their income is taxed at 15 percent, while as marrieds only the first $43,850 is taxed in that lowest rate. Combine this with married wage withholding status on a W-4, and the result is less tax withheld and a larger tax liability.

But don't wait until April 16 of next year to find out how much these traps sting your bank account. You could save money if you pay attention now. What one does before the end of the year can go a long way toward significant tax savings.

Here are some deductible expenses you can pay before year-end:

Give Away Your Tax Bill: As a general rule, the market value of stock - owned at least a year or more - that is donated to charity is deductible. Neither you nor the charity will pay taxes on the gain when the charity later sells it.

Also, don't give your children cash or pay their tuition bills with cash. Instead, give them shares of appreciated stock or funds and have them sell the shares to pay for school. The result is that the gains could be taxed at their lower capital gains rate (10 percent) vs. taxed at the parent's higher rate (20 percent).

Buy Home Office Gear: If you run a business outside or in the home, consider buying your computer, phone system, copier and furniture now. Business owners can deduct up to $20,000 of such expenses in one lump sum without stretching the cost over time. This is especially helpful when one spouse is receiving a salary from an employer and the other is self-employed.

Open Retirement Plan Accounts: Retirement plans for self-employed individuals that allow the maximum 20 percent tax deductible contribution must be set up before Dec. 31. Contributions don't have to be made by then, but you must have established the account and have an account number before this year closes.

Defer Income: Ask the payroll department if you've reached your contribution percentage or dollar limit for your company-provided retirement plan for the year. If not, ask to change the contribution from your remaining pay this year (salary and bonus) so that you can contribute the maximum allowed. This accomplishes two things: increases your retirement savings for this year and reduces your income reported on the corresponding tax return.

Consider delaying the exercise of any more stock options until after year-end. Of course, be mindful of the expiration date and be careful not to wait until then. If you are self-employed, wait until January to send bills to your customers.

Clean Out Flexible Spending Accounts: If you are using a flexible spending account, be careful to incur enough expenses and receipts to submit against what you deposited into the accounts. You will lose any unused funds in flexible savings accounts. Now is the time to find out what your balance is and spend it on out-of-pocket health-care and hild-care costs. These expenses must be incurred before the end of the year even though the receipts can be submitted next year to receive the reimbursement from your account.

Get Tax I.D. Numbers: Get a tax I.D. for any babies born in 2000. You must put your child's Social Security number on your 2000 tax return, unless the baby was born in December. Complete IRS Form SS-5 Application for Social Security Number.