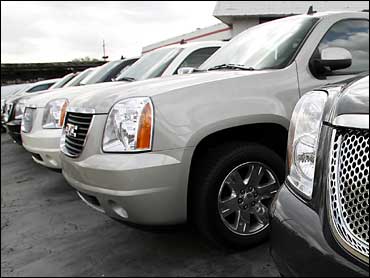 The Treasury Department, trying to stabilize the battered auto industry, will provide up to $5 billion in financing to troubled auto parts suppliers who are linked to Detroit's carmakers, officials said Thursday.

The funding would be made available from the government's Troubled Assets Relief Program, or TARP, said two congressional aides briefed on the plan.

The administration will create a financial entity to provide money for auto parts that large suppliers have shipped to the Big Three automakers but have not yet been paid for. In a statement, Treasury Secretary Timothy Geithner said the "Supplier Support Program" would "help stabilize a critical component of the American auto industry during the difficult period of restructuring that lies ahead."

"The program will provide supply companies with much needed access to liquidity to assist them in meeting payrolls and covering their expenses, while giving the domestic auto companies reliable access to the parts they need," Geithner said.

Auto suppliers have sought up to $25 billion to stabilize the beleaguered U.S. auto industry and have met with members of Obama's auto industry task force, which is reviewing $17.4 billion in loans to General Motors Corp. and Chrysler LLC and requests for billions more.

The program will be run through U.S. automakers - General Motors, Chrysler and Ford Motor Co. - that agree to participate. Suppliers to those companies would have to agree to terms of the government-backed protection and pay a small fee for the right to participate.

In a statement, General Motors said the program could "reduce the risk of vehicle production disruptions that would occur if auto suppliers were unable to produce due to lack of access to working capital liquidity."

Suppliers will be able to sell parts that they have not yet been paid for into the government program at a modest discount.

Many of the nation's roughly 5,000 auto parts suppliers have been cash-strapped for several years as GM, Chrysler and Ford have reduced production of cars and trucks because of falling sales. Their outlook has deteriorated with the economic downturn, a steep decline in auto sales and prolonged car plant shutdowns in December, January and part of February.

Auto suppliers have said that more than 40 major suppliers have filed for Chapter 11 bankruptcy protection and more could collapse if the government does not act. Parts makers employ about 600,000 people nationwide.

"This aid comes at a critical time for this vital industry and I am pleased the program will be able to keep the doors open and lines operating at many U.S. auto suppliers," said Rep. John Dingell, D-Mich.

Another Michigan Democrat, Sen. Carl Levin, said the supplier base was "critical to maintaining our domestic auto industry which, in turn, is a critical component of our economic recovery."

Some suppliers who make key parts for top-selling vehicle models could stop producing, forcing automakers to stop making those vehicles and undermining the ability of the car makers to restructure.

Parts suppliers told Treasury that the estimated March 2009 payments to suppliers from the Big Three automakers are $2.4 billion compared to an average of $8.4 billion per month in the fourth quarter of 2008, threatening their industry.