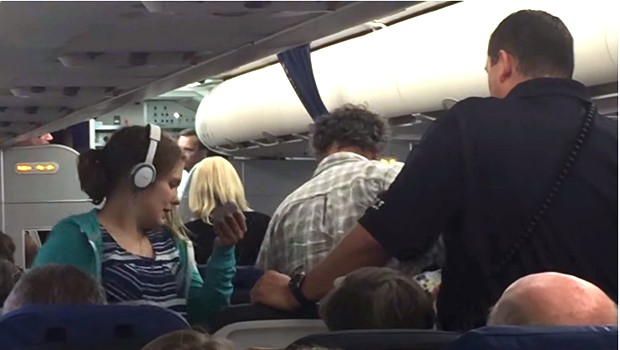 An Oregon family traveling with a 15-year old autistic girl was kicked off a flight this week for what the airline calls a "disruptive" situation.

The family calls it an outrage.

Video shot by a fellow passenger and posted to YouTube showed Salt Lake City airport police removing the family from a United Airlines flight last Tuesday, after the pilot made an emergency landing.

The girl's mother, Donna Beegle, was shocked when officers explained why.

"He said, 'Well, the captain doesn't feel comfortable flying to Portland with your daughter on his flight," Beegle told CBS News.

The trouble began halfway through the flight from Houston to Portland. Beegle says her daughter, Juliette, was hungry and started to act up.

"I know her. When she gets over hungry or over thirsty, she really struggles," Beegle described.

Her mother says Juliette is a picky eater, so she asked a flight attendant if she could purchase a hot meal from first class -- and says she was told no.

"Well, I said, 'How about we wait for her to have a meltdown and then she is crying and tries to scratch -- and then you'll want to help her,'" Beegle said she told the flight attendant.

Beegle eventually got the meal and said Juliette calmed down. Then came an announcement from the captain.

"We were shocked to hear them say, 'We're going to make an emergency landing in Salt Lake City, we have a passenger in the back of the plane who has behavior issues,'" Beegle said.

In a statement, United Airlines said, "...The crew made the best decision for the safety and comfort of all of our customers and elected to divert to Salt Lake City after the situation became disruptive."

But as Juliette and her family were removed from the flight, other passengers seemed surprised.

"This is gonna be a lawsuit," one person can be heard saying on the video.

According to Donna Beegle, that lawsuit is already in the works.