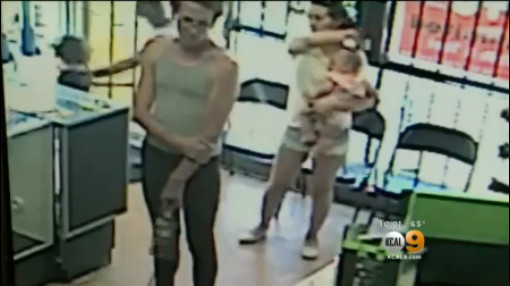 VICTORVILLE, Calif. -- In an incident caught on camera, a Southern California man has been arrested on suspicion of trying to abduct a girl at an electronics store, CBS Los Angeles reported.

Security video showed a young mother walking into the store in Victorville around 2:30 p.m. on July 1. The woman was holding her baby while her four-year-old daughter played with a candy machine by the door.

The store's owner said the woman told him she had noticed a strange man in the parking lot.

"She had said that the guy was looking at her from when she got out of her car, but she didn't think he would follow her," Miguel Macias told CBS Los Angeles.

But he did, and grabbed the little girl by the arm.

"She was just screaming, crying. She couldn't believe it," Macias recalled.

The girl's mother, along with another customer, immediately ran after her daughter.

Fortunately, the girl quickly managed to break free from the kidnapper. She was so terrified she was clinging to her mother's leg.

Craig Battles, who was cutting hair next door, ran out when he heard the commotion.

"She was crying. She wasn't screaming. She was really terrified," he said. "So when he ran, me, my clients... We all ran around there to see what was going on."

"I saw him (the suspect) sit down in the middle of the street and laugh, and then he got up and started running again," said Stella Moriel, the store owner's wife.

Witnesses said that's when bystanders tackled the suspected kidnapper, identified as 24-year-old Terry Ransom, and held him until deputies arrived.

Macias and his wife have a six-year-old child of their own. "It could have easily been my daughter if I had brought her to work with me," said Moriel.

The victim was scared and upset but did not appear to suffer any physical injuries, according to San Bernardino County Sheriff's Department spokeswoman Mara Rodriguez.

Ransom, of Hesperia, was being held on $250,000 bail, charged with kidnapping and child cruelty, Rodriguez said.