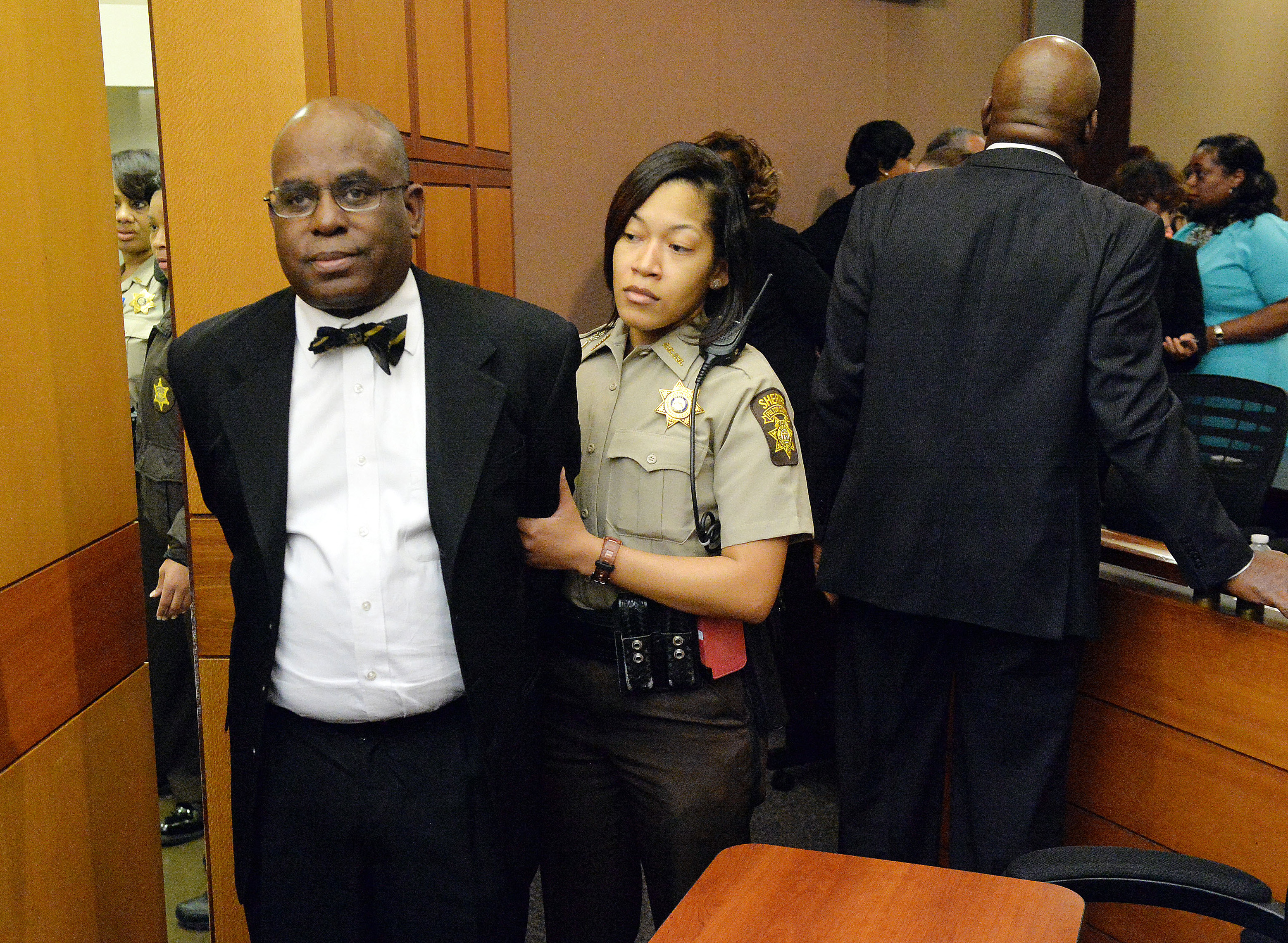 ATLANTA -- All but one of 10 former Atlanta public school educators convicted in a widespread conspiracy to inflate student scores on standardized tests were sentenced to jail time Tuesday, and the judge called the cheating scandal "the sickest thing that's ever happened in this town."

Fulton County Superior Court Judge Jerry Baxter had delayed sentencing by a day and encouraged all to negotiate deal with prosecutors. But only two agreed to deals. In both those cases, Baxter followed the state's recommendations: He gave a former teacher one year of home confinement and a former testing coordinator six months of weekends spent in jail.

Despite their lawyer's pleas for probation and community service, the remaining eight received harsher sentences, ranging from one to seven years in jail. They are expected to appeal and have 30 days to start that process. They will be free on bond while the appeals are pending.

"This was very, very remarkable, to have the judge sort of give the defendants a second chance," said University of Georgia law professor emeritus Ron Carlson. "The thing that maybe was a little surprising was the reticence of the defendants to step forward and do that."

Bob Rubin, who represented former elementary school principal Dana Evans, said the decision to turn down the deal wasn't hard for his client.

"She couldn't say something that wasn't true," he said, referring to the insistence by the prosecution and the judge that the negotiated deals include an acceptance of responsibility.

Those who took the deals - former teacher Pamela Cleveland and former testing coordinator Donald Bullock - waived their right to appeal. They also agreed to accept responsibility, reading aloud a statement apologizing to students, parents and the court.

Hurl Taylor, Bullock's lawyer, said his client is relieved and wants to move on with his life.

Baxter eventually agreed to let all the defendants qualify for first-offender status, after initially denying it for some. That means their records can be wiped clean once they've completed their sentences.

Misconduct by educators rarely ends up in criminal court, and the fact that so many of them received jail time sends a strong message, Carlson said.

"These sentences will send shockwaves through the world of education," he said, adding that he believes it will be nearly impossible going forward for an administrator to pressure a teacher to cheat.

When sentencing those who didn't take a deal, Baxter reserved the harshest punishment for three regional directors who oversaw multiple schools and were "at the very top of this scandal."

For them, Baxter went above prosecutors' recommendations of three years imprisonment. He ordered them to serve seven years in prison with the remainder of a 20-year sentence on probation, 2,000 hours of community service and a $25,000 fine.

"It's like the sickest thing that's ever happened in this town," he said.

A state investigation found that as far back as 2005, educators from the 50,000-student Atlanta school system fed answers to students or erased and changed answers on tests after they were turned in. Evidence of cheating was found in 44 schools with nearly 180 educators involved, and teachers who tried to report it were threatened with retaliation.

The teacher acquitted of all charges, Dessa Curb, was found not guilty of a racketeering charge and two charges of false statements, CBS Atlanta affiliate WGCL-TV reported.

In 2013, 35 educators were indicted on charges including racketeering, making false statements and theft. Many pleaded guilty before the trial, and some testified at the months-long trial. The jury acquitted one of the 12 former educators who went to trial and convicted the other 11 of racketeering.

Former Superintendent Beverly Hall was among those indicted, but she did not stand trial because her lawyers argued successfully that she was too sick. She died last month from complications of breast cancer.

The 11th convicted former educator had a baby over the weekend and will be sentenced later.

District Attorney Paul Howard told reporters after sentencing that his goal all along was to get the community to pay attention to what happened in Atlanta schools and to make sure the affected children get some relief.

"We believe the loss that we suffered was a community loss," Howard said.

He said his office is in talks to create the Atlanta Redemption Academy, which he said will seek to identify and assess the students who were hurt by the cheating scandal and to provide solutions for them, including help getting a job or GED training or assistance getting into college.

Bernice King, daughter of slain civil rights icon Martin Luther King Jr., and Rev. Gerald Durley, a former administrator at Clark Atlanta University and the Morehouse School of Medicine, have been tapped to head the board of the planned academy, Howard said.