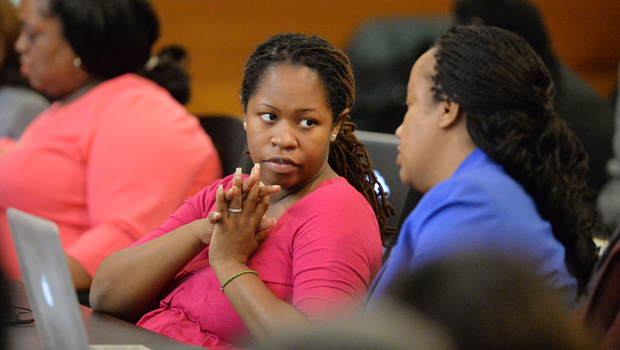 ATLANTA -- Eleven former Atlanta public school educators were convicted Wednesday of racketeering for their role in a wide-ranging conspiracy to inflate scores on students' standardized tests.

Only one teacher was acquitted of all charges. The 11 convicted represented teachers, testing coordinators and other administrators who were accused of participating in the conspiracy dating to 2005, motivated by pressure to meet federal and local standards to receive bonuses or keep their jobs in the Atlanta Public Schools district of about 50,000 students.

The teacher acquitted of all charges, Dessa Curb, was found not guilty of a racketeering charge and two charges of false statements, CBS Atlanta affiliate WGCL-TV reports.

When Fulton County Superior Court Judge Jerry Baxter asked for the guilty teachers to be taken into custody, their attorneys were quick to argue, but the judge held firm.

"I don't like to send anybody to jail," Baxter said. "It's not one of the things I get a kick out of, but they have made their bed, and they're going to have to lie in it, and it starts today."

A state investigation in 2011 found that educators gave answers to students or changed answers on tests after they were turned in. Evidence of cheating was found in 44 schools with nearly 180 educators involved, and investigators found teachers who tried to report it faced retaliation.

A grand jury indicted 35 educators in March 2013 on charges including racketeering, false statements and theft. Many reached plea agreements, and some testified at the trial. Superintendent Beverly Hall never went to trial, successfully arguing she was too sick to mount a defense. She died last month of breast cancer.

Hall insisted she was innocent and had no part in any cheating. But the educators said she was among those pressuring them to inflate students' scores to show gains in achievement - which were needed to meet federal benchmarks tied to extra funding.

Defense attorneys argued those convicted should remain free until sentencing because they don't have prior records, have community ties and showed up to trial every day. However, only one was allowed to remain free on bond - teacher Shani Robinson - because she is expecting to give birth soon.

"They are convicted felons as far as I'm concerned," Baxter said.

"I am shocked that he felt it necessary to do that," Rubin said. "I felt it to be unnecessary and vindictive."

Prosecutors said the 12 former educators on trial were looking out for themselves, seeking bonuses for higher test scores rather than worrying about the education of the children they were charged with teaching. Defense attorneys said their clients were caught up in an overly broad prosecution that overreached in charging them with violating racketeering laws most often used for organized crime.

The entire process was lengthy: The months-long trial began in August with more than six weeks of jury selection, and testimony concluded in late February. The criminal investigation by the Fulton County district attorney's office lasted nearly two years.

The investigation involved at least 50 schools as well as hundreds of interviews with school administrators, staff, parents and students. Fulton County District Attorney Paul Howard said it was the biggest and most complex case his office had ever handled.

"Our entire effort in this case was simply to get our community to stop and take a look at the education system," Howard said.

The cheating came to light after The Atlanta Journal-Constitution reported that some scores were statistically improbable.

Hall served as superintendent for more than a decade, which is rare for an urban schools chief. She was named Superintendent of the Year by the American Association of School Administrators in 2009 and credited with raising student test scores and graduation rates, particularly among the district's poor and minority students. But the award quickly lost its luster as her district became mired in the scandal.

In a video message to schools staff before she retired, Hall warned that the state investigation launched by former Gov. Sonny Perdue would likely reveal "alarming" behavior.

"It's become increasingly clear that a segment of our staff chose to violate the trust that was placed in them," Hall said. "There is simply no excuse for unethical behavior and no room in this district for unethical conduct. I am confident that aggressive, swift action will be taken against anyone who believed so little in our students and in our system of support that they turned to dishonesty as the only option."