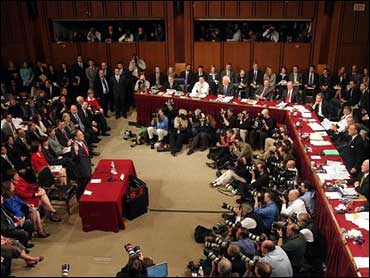 Alan Henderson continued to take advantage of his new starting role, scoring 22 points on 10-of-11 shooting as the Atlanta Hawks routed the Denver Nuggets 112-88 Wednesday night.

Christian Laettner, now Henderson's backup, and Steve Smith each added 18 points for the Hawks, who won their third straight.

The Nuggets have lost nine in a row to drop to 5-51 on the season.

Dikembe Mutombo, who played five seasons in Denver before signing with Atlanta after the 1995-96 season, picked up two early fouls and finished with seven points, 10 rebounds and five blocked shots.

Anthony Goldwire led the Nuggets with 20 points and rookie Tony Battie had 14 rebounds, but Battie missed an easy alley-oop dunk and a breakaway layup to symbolize Denver's frustrating season.

The Hawks controlled the game from the start, building a 12-point lead in the first quarter and extending the lead to 65-42 by halftime behind 63 percent shooting.

Henderson, averaging 20.6 points and 8.1 rebounds since moving into the starting lineup seven games ago, hit all seven of his shots in the first half and made his second 3-pointer of the season early in the third quarter.

Atlanta increased the lead to as many as 26 in the fourth quarter, and Denver never put together more than a 6-0 run throughout the game.

The Nuggets missed 15 of their first 17 shots, while allowing the Hawks to match their season-high for points in a half.

Notes: LaPhonso Ellis scored 15 points, and needs seven more to move past Bobby Jones on Denver's career scoring list. ... The Nuggets are 0-33 when failing to score 90 points and 0-26 when giving up 100 points. ... The Nuggets are 0-14 on Mondays, Wednesdays and Thursdays. ... Denver has lost to every team in the NBA except Milwaukee. ... The Hawks are 23-4 when leading at halftime. ... Atlanta's three-game winning streak has prevented coach Lenny Wilkens from losing his 900th career game.