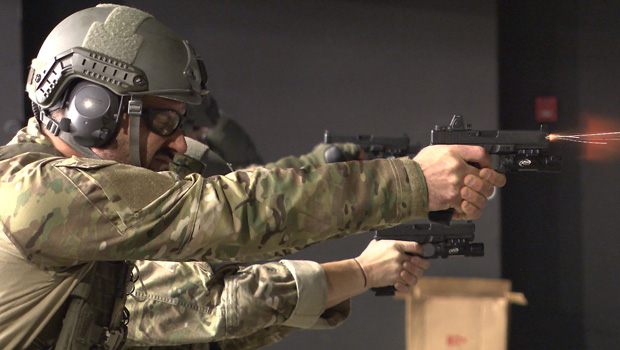 So whose job is it to police all these millions of guns in an ever-growing number of hands? The FBI conducts background checks on gun buyers. Use a gun illegally, and the answer is the ATF -- an agency that, as Richard Schlesinger tells us, has found itself in the line of fire almost from the beginning:

Immediately after the shooting at the Pulse nightclub in Orlando last month, where a gunman killed 49 people, agents from the Bureau of Alcohol, Tobacco, Firearms and Explosives went to work.

Within hours, ATF agents determined that the guns used in the attack were bought legally.

The ATF attracts headlines -- and heat -- for regulating gun shops, but that's just part of its portfolio.

Its agents also investigate arson and explosives. They played key roles after the World Trade Center bombing, and the attack on the Oklahoma Federal Building.

But the ATF's bread-and-butter is pursuing illegal gun traffickers. And when those investigations turn especially dangerous, the bureau's Special Response Teams are called in.

Royal family missing the star power of Harry and Meghan

His grandfather's war: David Eisenhower on the general and D-Day

Small wonders of design: The umbrella

"ATF prides itself with working cases against the most violent individuals in the United States," said Paul Massock, a Special Response Team commander.

Earlier this year the Detroit team rounded up suspected gang members charged with using illegal guns. Way before the crack of dawn, Bill Flannery had his men on the move. "It's another day at work," he said.

That "day at work" netted 23 firearms and 12 suspects.

The Bureau put more than 6,000 people behind bars last year. But the ATF has a track record that has put the bureau itself in the crosshairs since its very founding.

In 1791 Secretary of the Treasury Alexander Hamilton decided to collect taxes on whiskey. He created the office which morphed into today's ATF.

And from the beginning, people disliked the agency. The Whiskey Rebellion broke out to protest the taxes and some of the agents who collected it were tarred and feathered.

By the 1920s it had become the Bureau of Prohibition. In an era when mobsters were glorified in the movies, agent Eliot Ness became something of a hero as one of the "Untouchables" who took down Al Capone.

ATF historian Barbara Osteika showed Schlesinger the gun that made the Twenties roar: A Thompson machine gun, or Tommy gun. "It's also known as the Chicago typewriter," she said.

And it was very easy to buy: Al Capone bought his first three Tommy guns in a hardware store.

The Tommy gun's deadly popularity led to the National Firearms Act of 1934, giving the agency jurisdiction over a range of gangland weapons.

"So you're controlling Americans' booze and Americans' guns?" said Schlesinger.

"What's the surprise that you're so unpopular?"

Today the ATF remains as unpopular as ever. The bureau insists it targets only illegal firearms, but some gun rights advocates believe the agency is a threat to legal gun ownership. In the '90s, the National Rifle Association referred to ATF agents as "Jack-booted government thugs."

"Public safety is the reason we exist; it's not to take people's guns," said Deputy Director Thomas Brandon, a career agent who sat down for his first television interview to detail the ATF's mission. "It's to regulate firearms that can be misused. You know, we're a small agency with a big job."

But the ATF is not nearly small enough for its legions of opponents, who never tire of reminding people of two spectacular ATF failures: The 1993 violent showdown between the Branch Davidian religious cult and federal agents in Waco, Texas; and, in 2009, the ATF program to track and arrest gun traffickers called "Fast and Furious," which lost track of hundreds of guns sold to known criminals.

"I think they fail time and time and time again," said Wisconsin Republican Rep. James Sensenbrenner, who has introduced a bill to abolish the agency -- the latest version of an idea that goes back to the Reagan years. "I think we ought to get rid of the ATF," he said.

So far the ATF has survived, but its critics have scored major victories in efforts to hobble the bureau.

Technologically, the bureau has been deliberately kept in the last century. They must trace guns used in crimes the old-fashioned way: On the phone. They did this 370,000 times last year.

Many 2nd Amendment advocates strongly oppose a nationwide gun registry, so Congress has prohibited the bureau from creating a computerized, searchable database of gun manufacturing and sales.

Without a searchable database, it took 12 hours to find out who owned the guns used in the San Bernardino massacre last December.

Does that make sense to Thomas Brandon? In a word, no. "But there's a lot of things that don't make sense in this town, you know?" he chuckled. " And so yeah, would it be efficient and effective [with new technology]? Absolutely. Would the taxpayers benefit with public safety? Absolutely. Are we allowed to do it? No."

The ATF's gun tracing center is stacked with thousands of paper records, often all but unreadable, from gun shops that are out of business. They sometimes have to go through these, page by page, to trace a firearm.

Then there are the 139,000 gun dealers that are still IN business. The ATF has just 620 investigators to keep an eye on them.

Schlesinger asked, "Do you think that there is a concerted effort to keep ATF as weak as possible?"

Brandon sighed: "From sitting in the seat, you know, being around, I would be naive to answer your question to think that the politics of firearms enforcement, that there's not some translation into our budget allocation."

In January, President Obama responded to the San Bernardino shooting by proposing to beef up the ATF by adding 200 extra ATF agents.

Schlesinger asked Rep. Sensenbrenner, "Do you think the president will get his 200 extra ATF agents?"

"No," the Congressman replied without hesitation.

Today, the ATF finds itself in a familiar position: The agency that keeps trying to exert its authority over guns remains under the gun.