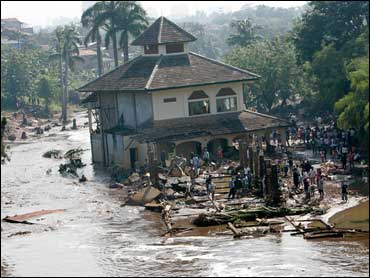 Indonesia's search and rescue agency says the number of people killed when a dam burst outside the capital has climbed to at least 69. Dozens more remain missing.

Local police chief Capt. Ngisa Asngari said Saturday that hundreds of soldiers, police and volunteers were digging through piles of mud and debris in search of survivors or more bodies.

The search and rescue agency, which is keeping the death toll, said the number keeps climbing.

It reached 69 early Saturday with more than 70 others missing.

The flood submerged hundreds of homes. Rescuers used rubber rafts to pluck bodies from streets that were transformed into rivers littered with motorcycles, chairs and other debris.

Officials predicted that the death toll would rise, delivering more than 100 body bags to the scene.

"I'm devastated," said Cholik, 21, crying as he sat next to the body of his 54-year-old mother. His brother-in-law also was killed and his 1-year-old niece was missing.

The earthen dam, built in the early 1900s when Indonesia was still under Dutch rule, surrounded a man-made lake in Cirendeu on the southwestern edge of Jakarta.

It collapsed just after 2 a.m. when most people were sleeping, sending 70 million cubic feet of water cascading into homes.

Several survivors said it felt like they'd been hit by a "mini-tsunami."

Water levels were so high in some places that people waited on rooftops for rescuers. Telephone lines were toppled and cars swept away, some ending up hundreds of feet (meters) from where they'd been parked.

By mid-afternoon, hundreds of victims gathered at nearby Muhammadiyah University, which was transformed into a makeshift morgue. Many were wailing as soldiers and police brought in bodies, covering them in white sheets of plastic.

Cecep Rahman, 63, lost his wife, son, daughter-in-law and granddaughter in the disaster.

"I heard a crashing sound and looked out my window," he choked. "The tide was so strong, like a tsunami. They were swept away. ... There was nothing I could do."

Health Ministry Crisis Center chief Rustam Pakaya and rescue teams at the scene said at least 58 people were killed and more than 400 houses submerged, some in water 10-feet deep.

(CBS)
A 9-year-old girl was found unconscious on one rooftop after the water receded, but she died on the way to the hospital, said rescuer Toni Suhartono, adding the child's parents and sister were among dozens still missing.

An investigation by the Ministry of Public Works will be carried out to see what caused the disaster, it said.

But Wahyu Hartono, a former official at the ministry, said the 40-foot-high dam has been poorly maintained in recent years because of budget shortfalls. After four hours of heavy rain the spillway overflowed and the base gave way.

"We need to find a way to take better care of these Dutch-era dams and dikes," he said. "Otherwise, there will be more problems like this in the future."

Seasonal downpours cause dozens of landslides and flash floods each year in Indonesia, a nation of 235 million, where many live in mountainous areas or near fertile plains.

More than 40 people were killed in the capital after rivers burst their banks two years ago. Critics said rampant overdevelopment, poor city planning and clogged drainage canals were partly to blame.