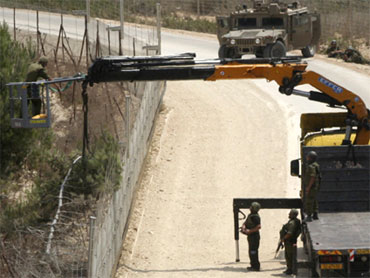 Lebanese and Israeli troops exchanged fire on the border Tuesday in the most serious clashes since a fierce war four years ago, killing four people including two Lebanese soldiers and an Israeli army officer.

The violence apparently erupted over a move by Israeli soldiers to cut down a tree along the fence dividing the two countries, a sign of the level of tensions at the border where Israel fought a war in 2006 with the Lebanese militant group Hezbollah.

The U.N. urged "maximum restraint" and said it was working with both sides to restore calm. After an initial clash of about five minutes, intermittent shelling and gunfire went on for several hours until the fighting stopped by mid-afternoon, witnesses said.

A Lebanese army officer said the clash started when Israeli troops tried to remove a tree from the Lebanese side of the border.

An Associated Press photo shows an Israeli standing on a crane reaching over the fence that Israel erected to separate the two countries. The fence, however, does not match the U.N.-drawn border in all places, and the Israeli military said in a statement that the tree was in Israeli territory.

"It was over the fence but still within Israeli territory," the military spokesman's office said. He said the tree cutting was coordinated with the U.N. peacekeeping force in south Lebanon, UNIFIL.

The Israeli military's northern commander, Maj. Gen. Gadi Eizenkot, however, accused Lebanese forces of shooting toward forces inside Israeli territory without any provocation." He said that while soldiers were removing bushes by the fence, Lebanese military snipers shot two officers who were more than 300 meters (yards) away from the fence.

The military announced that a 45-year-old battalion commander with the rank of lieutenant colonel was killed and a captain was critically wounded.

Eizenkot said Israel responded with infantry, tanks and artillery fire, and later sent helicopters and artillery fire at a Lebanese army base and command center. "These are the first casualties in the past four years (in the border area). We view this very seriously and that is why we responded so severely," he told reporters.

Nonetheless, he described the incident as "isolated." He did not elaborate.

Asked whether Israel crossed into Lebanon, Tenenti said: "This is what we are trying to verify, to get all the facts together and try to basically get the evidence of all the events."

Residents near the Fatima Gate, a one-time border crossing with Israel, briefly blocked a road as peacekeepers tried to pass, shouting: "Are you here to protect us or are you here to run away?"

Many in the area view the international force with mistrust, and there have been skirmishes between residents and the peacekeepers in the past.

Lebanese President Michel Suleiman denounced the fighting and urged the army commander to "confront any Israeli aggression whatever the sacrifices."

A Lebanese officer said one of the Israeli shells hit a house in the Lebanese border town of Adeisseh. One civilian was wounded in the shelling, he said. A security official also said a Lebanese journalist working for the daily Al-Akhbar newspaper, Assaf Abu Rahhal, was killed when an Israeli shell landed next to him in Adeisseh.

The Lebanese officials all spoke on condition of anonymity under military guidelines.

The border has been relatively quiet since the summer 2006 Israel-Hezbollah war that left 1,200 Lebanese and about 160 Israelis dead. Tuesday's fighting did not appear to involve Hezbollah fighters.

Tensions along the border have risen in recent months. Israel claims Hezbollah guerrillas have significantly expanded and improved their arsenal of rockets since 2006. Among other things, Israeli officials have accused Syria and Iran of supplying Hezbollah with Scud missiles capable of hitting anywhere in Israel, a claim Hezbollah has refused to confirm or deny.

Adding to the friction, more than 70 people in Lebanon have been arrested since last year on suspicion of collaborating with Israel.

Suleiman said the shelling was a violation of the U.N. resolution that ended fighting between Israel and Hezbollah in 2006, saying Israeli troops had crossed the U.N.-drawn Blue Line boundary separating the two countries and fired on a Lebanese army checkpoint in Adeisseh.

The Shiite Hezbollah guerrilla movement was not involved in Tuesday's clash. Hezbollah officials were not immediately available for comment. The group's leader, Sheik Hassan Nasrallah, was scheduled to address supporters via satellite at a huge rally south of Beirut later Tuesday marking Hezbollah's "divine victory" over Israel in the 2006 war.