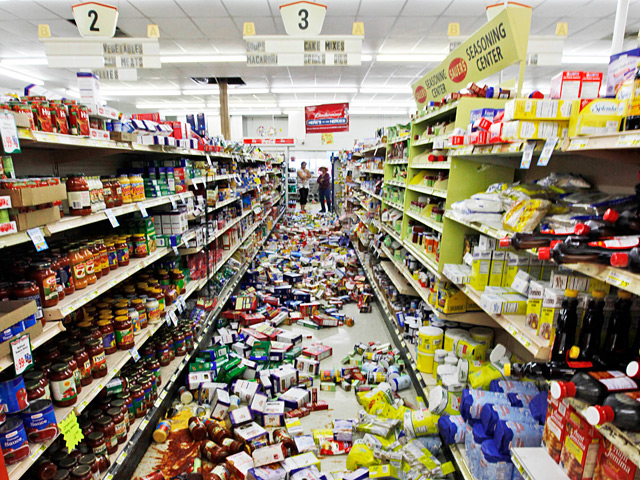 RICHMOND, Va. - The 5.8-magnitude earthquake that rattled the East Coast on Aug. 23 continues to produce aftershocks as the tally for damages near its central Virginia epicenter has grown to more than $17 million to help rebuild one communities' homes, schools, businesses and government buildings.

At least 18 aftershocks ranging in magnitude from 4.5 to as little as 2.0 followed the strongest earthquake to strike the East Coast since World War II, according to the U.S. Geological Survey. Other smaller quakes that wouldn't necessarily register on seismographs also could have taken place since last week.

Two of the latest aftershocks listed on the USGS website occurred late Monday night. They included one that happened during an evening meeting attended by the Louisa County Public Schools superintendent to discuss how the home to the quake's epicenter would deal with overcrowding because it had to close two schools for the year due to structural damage.

Aftershocks, smaller tremors that take place in the weeks and possibly months following a major earthquake like the one centered in Virginia, are usually felt in a smaller area than the original quake. Typically the larger the quake, the longer and the greater extent of aftershocks. The initial quake was unusual for many residents in Virginia and along the East Coast, putting some on edge and unsure of how to react when they experience an aftershock.

"Both the quantity and the magnitudes of these aftershocks are definitely in line with what one would expect," said Amy Vaughan, a geophysicist with the National Earthquake Information Center in Colorado. "Had the same size earthquake occurred, for instance, in the western United States ... the number of aftershocks we would have seen would've probably been far greater."

Vaughan said that because of the geography and landscape along the East Coast, the aftershocks are being more widely felt. The largest of the aftershocks so far — a 4.5-magnitude quake last Thursday — was felt by people in nearly 1,100 zip codes from New England to the north, Georgia to the south, and Illinois to the west, according to the USGS. Tens of millions of people from Georgia to Canada were jolted by the initial tremor.

It is difficult to know exactly how many aftershocks will occur, how large they will be, or how long the aftershocks will last. But Vaughan noted that Japan is still experiencing numerous aftershocks since the catastrophic 9.0 quake on March 11. That likely won't be the case in Virginia, but there's no way to know for sure because every earthquake is different, Vaughan said.

Damage assessment teams are still in the field tallying the cost of the quake's destruction in Louisa County, the epicenter of the earthquake. Teams had to shut down to deal with Hurricane Irene, although county spokeswoman Amanda Reidelbach said the area "fared just fine" in the weekend storm.

The latest numbers in the county show about $9 million in damage to residential structures in the area, $800,000 to commercial businesses, as well as $500,000 in damages to government structures. Reidelbach said the county also is expecting to be responsible for about $7 million to repair and replace the two schools damaged in the quake.

Virginia emergency officials could not provide any statewide figures and deferred questions to Louisa County, where Virginia's damages were likely to be highest.

Louisa County also has become the center of attention for some members of the USGS, as well as researchers from several other universities and groups studying the earthquake. Reidelbach said while they're being told to expect more aftershocks for weeks, the shaking ground there has not become an experience to which the area has become accustomed.

"I think that there's still a high level of anxiety," Reidelbach said, adding that they felt another aftershock on Tuesday morning. "I don't think that they're getting used to it. ... Every time we have one, it's a little unnerving."