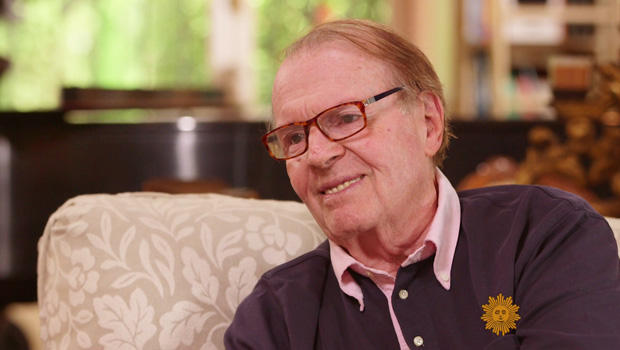 Lee Cowan visits the CBS News veteran at his abodes - in New York, and the south of France:

Half a world away from the studio in New York, is Charles Osgood’s other world. It’s his home away from home.

And what a home it is!

When Charles Osgood invited “Sunday Morning” correspondent Lee Cowan to his picture-postcard home in the south of France -- the one with a sun made of stone in the driveway, and the stunning Mediterranean views -- it was both a generous and intimidating offer.

After all, how do you sit across from your boss, let alone the newsman you grew up watching, and ask him about a career that’s lasted as long you’ve been alive?

Cowan asked, “Do you remember the first piece you did for television?”

Truth is, he made the conversation easy -- like he does with all conversations, even when he was correcting me on the art of writing.

For one thing, there is a big difference between the right word and the wrong word. “All the words are wrong, except for the right one,” Osgood explained.

His style, his manner, his curiosity are as fresh as the grapes hanging in his garden. But little has satisfied his professional palate more than his Emmy-winning run at “Sunday Morning.”

“A lot of television is about ratings, but I don’t like to think about it as ratings,” he said. “I like to think of it as people watching the show and getting some satisfaction out of it. And learning something, and not having something forced down their throats.”

“I do. I cannot think of anything that has given me more pleasure professionally than “Sunday Morning,” because first of all, it feels great to be part of something that people love, and I know that they do.”

He loved it so much he rarely took time off, but when he did he came here. Why wouldn’t he?

It’s a place where leisure is cherished -- not something you squeeze into two weeks around national holidays.

“Yeah, you tend to get up late, and eat too much and drink too much!” she laughed.

Jean is his ever-present companion in all manner of things, but especially food.

And there is a routine here: “There are a couple of naps involved,” Osgood said. “There’s one nap usually after lunch, and that lasts right up until cocktail time, so the day sorta slips away.”

There is, of course, the piano -- his concert grand piano that occupies his time (and most of the living room).

And there’s not a bad view looking out from the piano bench onto the Mediterranean. “Yes, that’s right. And there are French songs that are written about this very view.”

He bought that Steinway piano from CBS, in fact, back when it owned Columbia Records, and it’s a historic piano, indeed.

“This is the piano that Glenn Gould used for his first recording of Goldberg Variations,” Osgood said. “It was used for Frank Sinatra recordings. Mitch Miller also used it for every one of his ‘Sing Along With Mitch’ records.”

Outdoors, flowers bloom at every corner, surrounding his pool with both a fragrance and a color that is hard to beat.

It’s here they work off the calories from the brie and the baguettes. They do it together, like they’ve done everything.

Cowan asked if they remembered their first date.

“That depends on what you call a date,” Jean laughed. “Because the first time you ever asked me to go out someplace, you wanted to take me to a basketball game.”

“Yeah, wasn’t that romantic of me?” Osgood said.

Osgood reasoned, “I think she had to arrange her sock drawer.”

He must have done something right; they’ve been married now for 42 years, and have five kids and three grandchildren.

It’s hard even for Charlie to get the whole family together, but we managed to gather three of the kids -- Jamie, Annee and Winston -- in his New York Apartment.

Cowan asked the young brood, “Was there one piece of advice that your dad gave you guys that really stuck with you?”

“That persona that he is on television encapsulates him pretty well,” Winston said.

They loved growing up with their dad’s passion for baseball, his knowledge of history, and their home filled with music.

“What was that like?” asked Cowan. “You’d bring friends over and your dad would just be ...”

“Oh, it’s totally embarrassing!” Annee laughed. “Your dad is sitting around in his robe playing the banjo? Definitely not cool when you’re 12 or 13!”

What was cool was their dad’s skills in the kitchen.

“We had our own Sunday morning routine, where our dad would make us pancakes for breakfast,” Jamie said. “And so that went away when ‘Sunday Morning’ started, and frankly I’m relieved that this chapter of his life is over so that we can kind of bring that routine back into our lives. I have not had a decent pancake in 22 years!”

It’s not that their dad’s work is done, however. In fact, Charlie is not really retiring. He’ll still be on the radio, mostly from New York, but also when he’s in France. He built a makeshift studio down in his basement.

The reality, though, is life will be different after today, in all sorts of yet-to-be-determined ways.

“So what’s it going to be like for you, Jean, to hear Charlie say, ‘See you on the radio’ for the last time?” Cowan asked.

“Well, that’s all right because it means he’ll be here more, won’t it?” she smiled.

Not a bad place to turn a page.

Cowan asked Osgood, “What’s the one thing you want people to know about this next chapter in your life?”

“I don’t even know myself what the next chapter of my life is going to be,” he replied. “But I will have a little more time, without a doubt, to be with Jean and the kids and the grandkids and the friends that you have.

“It’s like asking someone when they’re dying, ‘Are you ready for this?’  No!!  No, I want there to be a tomorrow, and there will be!”

"Victory Gardens" for the war against COVID-19