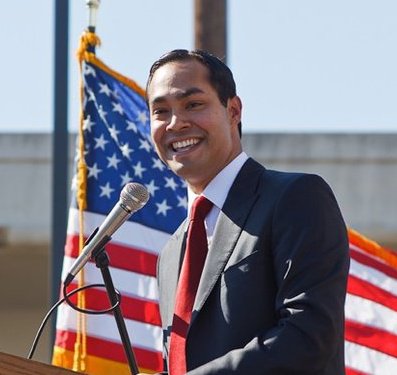 (CBS News) At last week's Republican National Convention, the GOP made no secret of its efforts to woo Hispanic voters: In addition to a handful of events and press conferences oriented toward Latino audiences, rising Hispanic Republican stars like Susana Martinez, the nation's first Latina governor, Florida Senator Marco Rubio, and Ted Cruz, a Senate candidate and Tea Party favorite, drove home the message that the words Republican and Hispanic are not mutually exclusive -- in some of the most plum speaking roles of the week.

As Democrats kick off the first night of their presidential nominating convention in Charlotte on Tuesday, the roster of speakers will be similarly diverse: Among those on the opening night lineup are Los Angeles Mayor Antonio Villaraigosa, keynote speaker and San Antonio Mayor Julian Castro, and Castro's twin brother, Joaquin, who is a Texas state Senator currently running for Congress in Texas's 20th district, a seat being vacated by retiring Latino Democrat Charlie Gonzalez. Throughout the week, Gonzalez, New York Representative Nydia Velazquez, California Rep. Xavier Becerra, and a number of other people of color will address the crowd.

Both parties have in recent months worked hard to build and mobilize the Hispanic vote. But even while Democrats enjoy an enormous advantage in the polls among Hispanic voters, some have questioned whether the GOP boasts a deeper bench of promising Latino leaders - as evidenced by not only the large number of Latino speakers at the convention week festivities, but also the rank and star power of some of the party's Hispanic lawmakers.

"Why is it that the Republicans have elected more women governors and have two Hispanic governors and the Democrats don't?" asked NBC's Chuck Todd in an interview last week with Villaraigosa. "Why do you think that is?"

Indeed, there are currently no Latino Democratic governors. In general, Latinos are dramatically underrepresented among the ranks of U.S. governors: In total, there are two.

There are also only two Latinos currently serving in the Senate - Republican Marco Rubio and Democrat Bob Menendez, of New Jersey. Of the 435 members of the House of Representatives there are 24 Hispanics: 17 Democrats and seven Republicans.

"We have a lot more legislators and mayors and Congress members that are women, that are Latino, that are Asian, that are African-American," Villaraigosa told Todd, responding to his question. "We have a much broader tent, a much broader representation of every walk of life, people from, you know, every ethnicity and race and sex."

"They may have more governors," he added. "But we have a much broader field when you look at all of the elected officials."

According to Arturo Vargas, the executive director of the NALEO Educational Fund, it's true that Democrats boast a deep bench of Latino political figures - but he points out that many are local rather than statewide officials, and subsequently enjoy less national recognition.

"Because the bench is deeper there's much more competition to be part of a national platform" on the Democratic side, Vargas said. At the same time, he argued, Democratic Latino lawmakers tend to be less known "because many of them are not in statewide office - there's currently no Latino Democratic governor."

The lone Latino Democratic Senator, Bob Menendez, does not appear to have a speaking role at this year's convention - which Vargas called a "significant oversight."

Going into this week's festivities, Democrats insist that comparing the number of Latino elected officials speaking at each of the dueling conventions does little to demonstrate which party better serves the Latino electorate.

"Mitt Romney and Paul Ryan are on the wrong side of every issue of importance to the Hispanic community and the most extreme presidential ticket on immigration," Gabriela Domenzain, the director of Hispanic press for the Obama campaign, said in an email. "The Romney-Ryan ticket will disproportionately hurt Hispanics, would end Medicare as we know it by turning it into a voucher system, slash education programs from Head Start to college aid, and would veto the DREAM Act and oppose any sensible solution to fix our broken immigration system. Hispanics have already rejected Romney and Ryan's positions, and are motivated to make their voices heard and support President Obama on Nov. 6."

Democrats also point out that 40 percent of the Democratic delegates are people of color -- compared to about 2 percent at the RNC, according to the Washington Post -- and that the convention will be live-streamed in Spanish as well as English.

"We are incredibly proud of the diversity of our party and our delegates. More than 40 percent of our delegates are people of color - including at least 27 percent African-American and at least 13 percent Hispanic - and half of our delegates are women," said Diana Rubio, director of Hispanic press for the DNC, in an emailed statement. "This diversity reflects not just our party, but America as well - and it is reflective of the President's plan and vision for greater economic security for every American."

Current polls would suggest that, at least for the time being, Mitt Romney has little chance of securing a majority of Hispanic votes. According to an August poll by NBC News/Wall Street Journal/Telemundo, Obama leads Romney 67 percent to 23 percent among Hispanics.

But even a bump in Latino support for the former Massachusetts governor could potentially help swing the pendulum this November: In battleground states like New Mexico, Nevada, Colorado, and Florida, all of which are home to large Hispanic populations, the race is expected to be very close.

According to Vargas, the Democratic Party needs to make some changes in how it recruits Hispanics going forward if it wants to truly diversify the party going forward -- particularly as Republicans continue ongoing efforts to broaden their reach among those demographic groups.

"I think the Democratic Party needs to do much more to identify, groom and support Latino candidates," he said, pointing out that it's rare for Democratic Latino lawmakers to be elected in non-Latino majority districts. By contrast, he points out that New Mexico Governor Susana Martinez and Nevada Governor Brian Sandoval - the nation's two lone Latino governors - did not get the majority of Hispanic votes in their states.

"Democrats need to make long-term investments from the bottom up," he said.