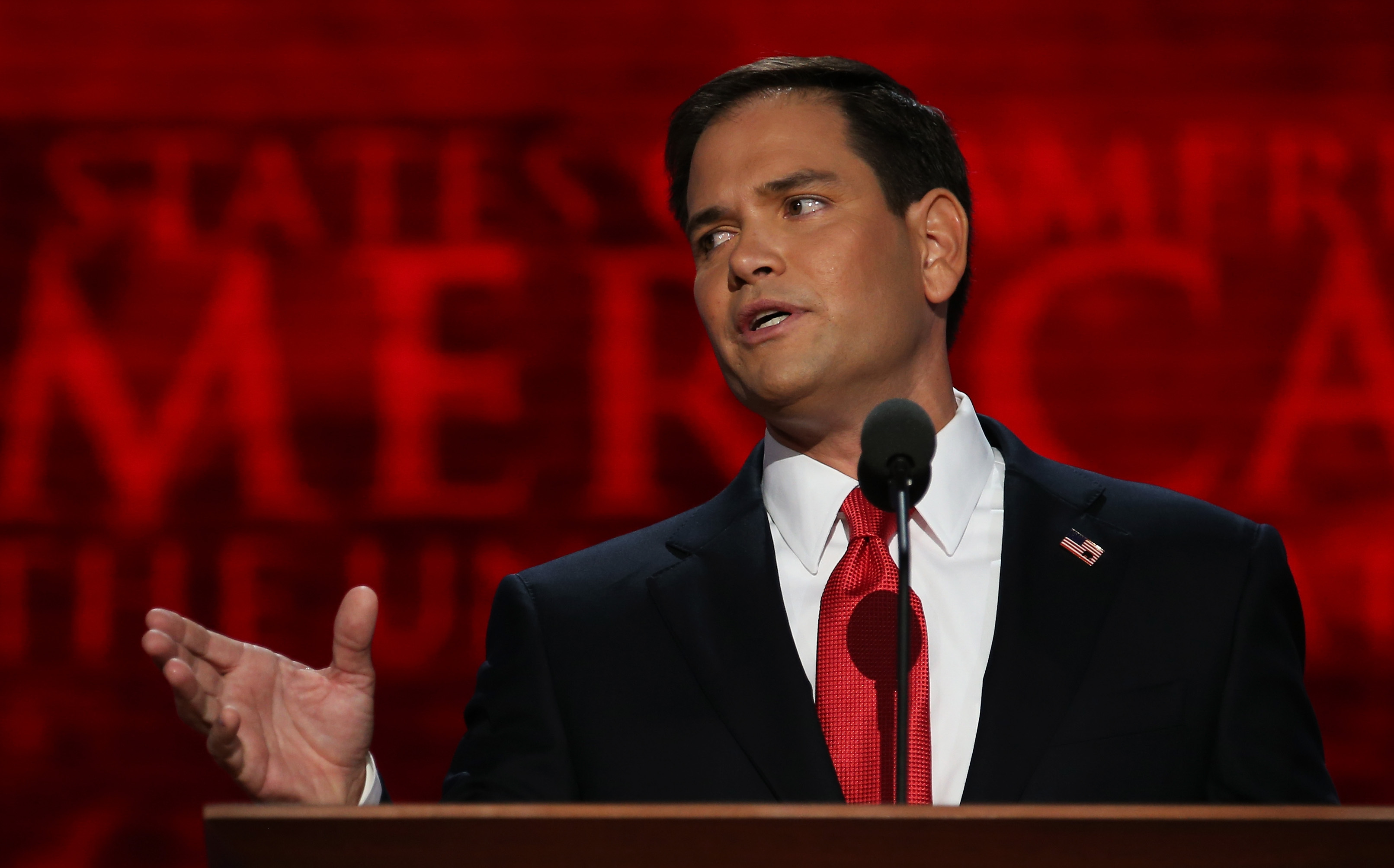 (CBS News) TAMPA, Fla. - Florida Senator Marco Rubio introduced Mitt Romney at the Republican National Convention Thursday as the man who will ensure the United States continues to be the land of opportunity and that "new beginnings" are possible.

"Yes, we live in a troubled time. But the story of those who came before us, reminds us that America has always been about new beginnings," Rubio said to an attentive and packed arena.

Rubio took to the stage to rousing applause. He laid out the case for a Romney presidency, which he said would be about opportunity and progress. He said a Romney presidency would reverse the difficult economic times of the past three-and-a-half years under President Obama, whom he called a good person but "a bad president."

"These ideas don't move us forward, they take us backwards," he said.

"These are old, big government ideas," argued the freshman senator, who won election in 2010 with Tea Party support. "Ideas that people come to America to get away from."

"Mitt Romney knows America's prosperity didn't happen because our government simply spent more. It happened because our people used their own money to open a business," he added.

Rubio is considered a rising star in the Republican Party and Romney said he was vetted as a potential running mate. His Cuban-American heritage represents the diversity the Republican Party seeks and needs as the Hispanic population continues to grow. Rubio detailed his background as a young immigrant child with parents who sacrificed to ensure his success.

Rubio did not discuss the topic of immigration, a divisive issue in the Republican Party that backs stricter immigration laws; Rubio did, however, talk about his family's immigration to the United States from Cuba. He also juxtaposed life in other countries that, he says, restrict upward mobility with possibility in the United States.

Rubio said his father, a native Spanish speaker, ingrained in him a message of opportunity. "In this country, you will be able to accomplish all the things we never could."

"Many nights I heard my father's keys jingling at the door as he came home after another 16-hour day. Many mornings, I woke up just as my mother got home from the overnight shift at K-Mart," he he added.

"That's not just my story. That's our story," Rubio said, adding that personal hardship leads to personal success and "an exceptional America."

Attempting to break down the perception that Romney is a wealthy man who had everything handed to him, Rubio said Romney's father "struggled through poverty and the great depression" but became successful. (Romney's father, George Romney, ran American Motors in the 1950s and was governor of Michigan in the 1960s. He also ran for president but failed to win the Republican nomination during the 1968 election.)

Rubio translated his childhood experiences into the experiences of many Americans who's mother "struggled to give you what she never had," the baby boomer who can't afford to retire or the college graduate who can't find a job. He said Romney can create a life that's "better than it's ever been."