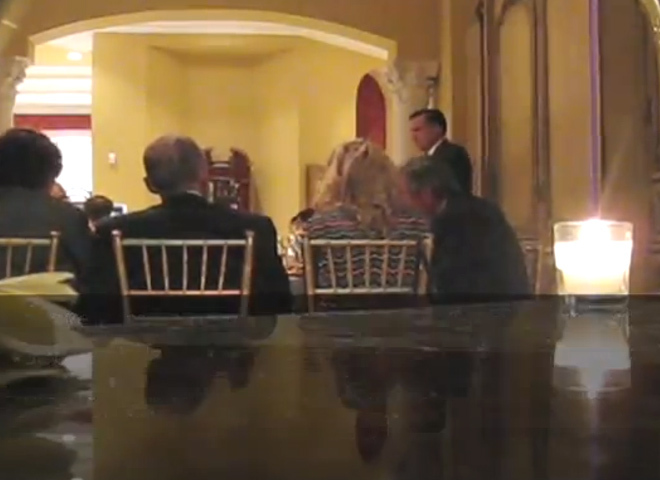 (CBS News) At the same fundraiser where Republican presidential candidate Mitt Romney described the majority of President Obama's supporters as people who are "dependent on government" and "believe that they are victims," Romney also talked foreign policy, specifically his view that peace in the Middle East may not be feasible.

In a video obtained by Mother Jones that was shot at a May 17 fundraiser, Romney was asked how the Israeli-Palestinian issue could be resolved. Romney responded by saying the Palestinians aren't interested in peace.

"I look at the Palestinians not wanting to see peace anyway, for political purposes, committed to the destruction and elimination of Israel, and I say there's just no way," Romney is heard saying on the video.

"[S]o what you do is, you say, you move things along the best way you can. You hope for some degree of stability, but you recognize that this is going to remain an unsolved problem...and we kick the ball down the field and hope that ultimately, somehow, something will happen and resolve it."

He added that he doesn't support Israel bowing to the Palestinians.

"The idea of pushing on the Israelis to give something up to get the Palestinians to act is the worst idea in the world."

Publicly, Romney has been more restrained and actually said in an interview with Israeli newspaper Haaretz in July, "I believe in a two-state solution which suggests there will be two states, including a Jewish state."

He also discussed Iran - saying, "Iran... the mullahs... crazy people" could blackmail the U.S. if they had nuclear capability.

"[W]e really don't have any option but to keep Iran from having a nuclear weapon," he added.

"The president's foreign policy, in my opinion, is formed in part by a perception he has that his magnetism, and his charm, and his persuasiveness is so compelling that he can sit down with people like Putin and Chávez and Ahmadinejad, and that they'll find that we're such wonderful people that they'll go on with us, and they'll stop doing bad things. And it's an extraordinarily naive perception," Romney said.

"But I always keep open the idea of pushing on the Israelis to give something up to get the Palestinians to act is the worst idea in the world. We have done that time and time and time again. It does not work. So the only answer is show them strength. American strength, American resolve, and the Palestinians will some day reach the point where they want peace more than we're trying to force peace on them. Then it's worth having the discussion. So until then, it's just wistful thinking."

Romney spokesman Ryan Williams said in an email, "The Governor makes clear as he has in the past that peace is not possible if the extremist elements on the Palestinian side refuse to recognize Israel's right to exist. Currently the Palestinian government is discussing a unity pact with Hamas. This cast great doubt on the prospects of peace should that agreement be reached. But as Mitt Romney indicated he is committed to a two state solution and will not throw up any barriers to both sides negotiating that solution."

In response to the release of the full context of Romney's remarks, CBSNews.com adjusted this story and its headline to reflect the added information.